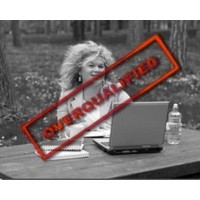 Another, Paul Hensel, is a self-employed electrical engineer currently searching for a job with an established company. He says in his experience most HR professionals, especially those in large businesses, turn their nose up at freelancers and entrepreneurs.

A paper to be presented next month, at the Academy of Management annual conference, though not yet vetted in a peer-approved journal, details an experiment conducted in late 2012 by five European academics.

What are large companies thinking?

SmartCompany spoke to several recruiters to figure out why this was the case.

Elizabeth Kingston, of recruitment firm Kingston Human Capital, outlined some of the common misconceptions those in large corporations can have of entrepreneurs.

She says there’s a common perception that entrepreneurs “couldn’t cut it” in the corporate world – that they turned to self-employment because they failed.

Some doubt whether someone who was self-employed is able to follow protocol and procedures in business. And recruiters can be uncertain about how an entrepreneur will react to being boxed into a role, no longer having control over the wider business.

Brendon Booth, of pb Human Capital, added that there’s a stigma that people who run their own business “find it harder to play with others”.

But John Caldwell, the CEO of retail recruitment firm RWR Group, says that while cultural concerns are an issue for some businesses, the biggest stumbling block for the formally self-employed is far more practical in nature.

“Returning to a workforce or an industry after a few years away is likely to be a problem for someone whether they’ve been running their own business in that time or not,” he says.

“In business these days, just three minutes out of chosen field is a long time.”

Recruiters, Caldwell says, make an entirely understandable and predictable choice in preferring specialists over generalists for a given position.

“Most recruitment agencies have a fill vacancy rate of around 30% – which means they only fill one in three of the roles they’re asked to fill. We’re desperately looking for qualified people that match the roles.

“Most of the time with entrepreneurs, we’re getting people who have exposure to a role within their business, but aren’t a specialist in that field. They’re just not as relevant to what a business needs.”

It’s something Dawes also raised, when asked to speculate on why she wasn’t able to find a job.

“For me, being a business owner, I wore so many different hats. One day I was a receptionist, another I did legal work, a third I was an accountant. It was hard for me to say, yes, I’ve worked in marketing for four years, when I did a bit of everything.”

Faced with her inability to secure work in marketing or business, Dawes started another business combining personal training, nutrition and life coaching, which is going well. She told SmartCompany she’s happy where she is.

“But if I ever did want to work in a business, well, I’m not confident my skills would be recognised… I wonder if I will ever be able to make that transition.”

This is part one of a two-part series. Read part two (Escaping the entrepreneurial stigma: How the self-employed can return to the belly of the beast) tomorrow.