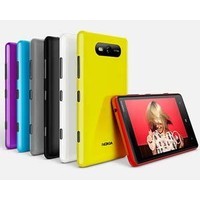 Microsoft’s Windows Phone 8 update has quite rightly been praised, with the software adding some much-needed features like multi-tasking and copy and paste. It is often overlooked, but Windows Phone 8 is a capable alternative to iOS or Android.

Can the hardware justify a switch, though? The new Windows Phone 8 handsets are certainly nice to look at. The Lumia 820 is being portrayed as somewhat of a flagship piece of kit. Is it worth a look?

The Nokia Lumia 820 is powered by a dual-core Qualcomm Snapdragon processor with 1GB of RAM and 8GB of built-in storage, although that can be expanded with up to 32GB through a MicroSD slot.

The cameras feature a 0.3 megapixels lens for the front, and an eight megapixel lens on the back capable of recording HD video at 1920x1080p.

The Lumia 820 is a budget handset, cheaper than some of its cousins. So you would expect the device to feel a little cheaper – and that’s exactly what you’re going to get.

Over at Engadget, the publication noted that the device doesn’t necessarily carry the premium build that came with the Lumia 920. While it isn’t necessarily bad, it notes there are a few disappointments – like the plastic finish across the physical buttons.

“There’s no micro-drilled detail here, while a substantial screen composed of the border around the AMOLED display, the phone’s edge plus the casing around it makes the phone wider than it perhaps needs to be.”

And the disappointments continue over at The Verge, where it notes the resolution simply doesn’t compete with some of the phone’s rivals, including the iPhone or any of HTC’s devices.

However, it did praise some aspects – saying the low brightness setting helped highlight the colours, and noting the addition of a “high sensitivity mode”.

“You can control this option in the settings menu, and it will allow you to wear gloves and operate the display. It worked flawlessly for me in London’s typical November cold, and it’s a unique aspect that Nokia has added to its latest Windows Phone 8 handsets.”

PCWorld noted the device itself is a little heavier and thicker than some of its competitors, which may put off some buyers.

Back at Engadget, the publication said the front-facing lens is a little behind the 920 model but manages to maintain a quality picture – “although we’re still screaming out for an HDR mode.

And at The Verge, it put battery life to the test, saying the device lasted about a day on average surfing and usage. In other words, it’s on par with the competition.

The Lumia 820 is a fine budget phone – but only if you’re a fan of the Windows Phone interface. If you’re after that, then the 820 is perfectly reasonable. But that’s a small market, and in many cases they’ll want to spend more on the Lumia 920 instead.

Otherwise, you may be better off looking at some of the budget Android phones on the market.