How a highflying stockbroker flamed out and rose again 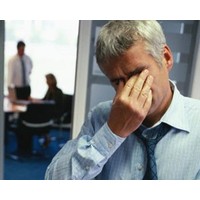 Greg Burns, a highflying stockbroker, sat down in front of his GP, who looked up at him. “What’s the matter with you?,” the doctor asked. “You look like you are going to die. It is the saddest I have ever seen anyone in my life.”

Burns started to weep. It happened to him a lot at the time. It was 2004 and he was at the doctors at the behest of his wife’s counsel for him to get help.

Burns had been in the high-pressured, high-profile, competitive world of stockbroking for 35 years. This was where he had ended up: wealthy, successful, powerful … and crying uncontrollably.

Greg Burns is his real name. Many people in business today will know Burns from his role in some of the most high-profile stockbroking firms over the past three decades. Burns was named Stockbroker of the Year by business magazine, BRW, three years in a row in ‘88, ’89 and ‘90.

Burns is willing to reveal his identity in this story – the remarkable tale of his own emotional breakdown, anxiety, depression and recovery – because he wants to end the stigma and the shame associated with the issues he faced. He wants to end the competitive culture that undermines any chance of honesty in the workplace, and for executives to reach out for help before they reach rock bottom. In short, he wants to prevent mental health issues. “I never want anyone to suffer what I went through,” he tells LeadingCompany.

When Burns left school at 17 with top marks, his father advised him that only “homosexuals and losers” went to university, so instead to join the public service.

While at the State Electricity Commission, Burns daydreamed about the school economics excursion he had taken the trading room of the Australian Stock Exchange (now the Australian Securities Exchange).

“All these guys were all yelling and screaming, having fun and getting paid for it,” he says. He wrote to every stockbroking firm in Melbourne and six months later took a job as a messenger.

Burns began his fast track to the top. By 1975 was working the trading room floor. After 12 months, he was poached by Potter Partners, then to work with Rene Rivkin, a flamboyant stockbroker who worked in Sydney (and was much later found guilty of insider trading).

He moved back to Melbourne and then joined a new stockbroking firm, McIntosh Griffin Hamson & Co, on January 27, 1980. “McIntosh was determined to make an assault on the market dominance of the big stockbrokers in corporate and institutional broking,” he says.

By 1982, Burns was a partner, and the long hours started. “I hated weekends because I wasn’t allowed to work,” he says. “I had no other interests.”

Burns married in 1980, but his obsession with work drove him to maintain enormous hours. “For 12 years I started at 6am and left between 6.30 and 7pm each night,” he says. “Then dinner, and on the phone to the London office.

“A lot of us didn’t like each other, but everyone had their role,” he says. His fellow partner had outside interests – farming, tennis. “I was the young gun, best at what I did.”

McIntosh grew from start-up to 250 staff in five years, achieving a 75% dominance of the corporate deals, infuriating the major brokers that were once unchallenged. It was valued at $750 million in its heyday.

By the time of the stockmarket crash in October 1987, Burns was already showing signs of burnout. By this stage, his weekends were spent staring at the walls, trying to recover enough energy to tackle another 80-hour week.

His wife took a stand. “She said if you are going be like this then I’d like to buy a country place where at least I can get on with things I want to do,” Burns recalls.

Burns began to slide into a malaise in 1989 as the founding partners retired. “It started to unravel. I became disenchanted. Work became a chore.”

Burns’ story is continued over the page. Do you need help? In Australia, call 13 11 14 for Lifeline Australia.