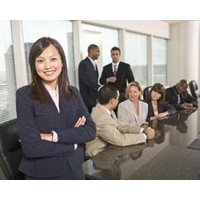 For a rising executive, a bad presentation to the board can kill your career progression, says Julie Garland McLellan, a corporate governance adviser and the chair of Oldfields Holdings. Screw up your board presentation, and you can be tagged a no-hoper, shifted from department to department, and ever so slightly downwards.

But presenting to the board, while high-risk, can also boost your career. If you pull it off, it never hurts to be well-regarded at your company’s highest level.

This means ambitious executives need to know how to get in, and out, of the boardroom in one piece.

Boardrooms are notoriously difficult to present to because they’re unlike any audience people are likely to have come across before.

The first trick to not stuffing up a presentation to the board, Garland McLelland says, is to know when it’s not needed. “Why climb the mountain when the village is in the valley? Plenty of things don’t need to be taken to the board to be acted on.”

A company’s directors all bear personal liability for the workers and shareholders in a business, even when they have no direct control over events. “This is a breach of human rights,” Garland McLellan says wryly. “But it also makes for good corporate governance.”

This affects the dynamics of a board room. Everyone in the room is equal, and acts independently. “They aren’t a cohesive team. They’ll argue with each other, and with you,” she says.

Executives can prepare by scoping out the members of the board, and perhaps asking the company secretary what meetings are normally like. But controlling a boardroom is more art than science, as few directors appreciate being told what to do by executives. But Garland McLellan offers some tips:

Executives should also be aware of where on the agenda their proposal or briefing is. If you can, avoid presenting at the start or the end. “Directors need time to settle down,” Garland McLellan says. “If you’re speaking at the start, drag your presentation out to give people time to focus. By the end they’re exhausted, so if you’re speaking last, go fast and hope you wrote a good briefing paper.”

Good briefing papers are important because many boards hate receiving anything new at a meeting.

But it’s not just what happens before and during the meeting you have to worry about. Garland McLellan says she’s seen many executives nail a presentation, and then be promptly forgotten about because they didn’t follow through once they left the room.

“A thank-you note never goes astray,” she says. “Neither does an offer to come in again and go over anything that still needs work, or to respond to directors who have questions or concerns individually.”

It’s also important to consider the minutes, which are the ultimate record of what was discussed and decided on. “Whoever writes the minutes runs the company. So propose a resolution to the company secretary,” Garland McLellan says. “They’ll love you for it.”

Proposing the resolution also allows executives to summarise the agreement, and outline the next steps for a proposal in the minutes.