How to reach business highs at your own pace 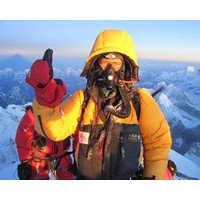 It is a calm, measured walk. No rush, no race, seemingly little intensity.

No flashy figure-hugging, space-material shirts advertising a brand or trend. Just a dutiful stroll that has made him one of just 300 people who have climbed the highest peak on each of the seven continents.

Australia’s Kosciuszko and Africa’s Kilimanjaro were a mere walk (almost in the park). Everest required patience.

The lesson here for businesses is to find your stride.

Long-term achievement requires pace, persistence and consistency. It’s rarely a sprint, but it may require occasional surges of energetic push up a steep ridge or through a gully.

Make haste slowly comes to mind as a maxim.

The former soil scientist climbed most of the mountains while posted around the world for his agricultural supplement employer. He combined it with his other love: composing and performing church bell ringings.

While others climbing Everest this year were focused on diet and exercise procedures, Peter Ellis (without internet or other communications while waiting at base camp for six weeks for a weather window) composed 240 lines of bell ringing.

And he did not train for the climb like many of those who failed to reach the top.

One such person was a London city trader who trained by running up flights of stairs with 30kg of weights for hours a day. That man failed to make the final burst to Everest’s peak.

Ellis’ point is that to be consistently successful requires a built-in fitness; not built-on fitness.

He does not do special exercises, or train for a particular event before dropping it for another fad or goal. He walks 15-25km several times a week, and climbs up 1000 metres every few days, if possible (although it’s hard in the UK with so few mountains!)

This is the type of regime that makes you ‘walk fit’. It is built into your body, regardless of your shape, or any ‘just-in-time’ training.

The same principal applies in business.

Both the mind and body need to have an everyday fitness from regular, relaxed exercise. That’s much more successful than specialised short-goal training.

A business owner or manager with their own practised walk can ignore some of those running interferences, certain that they are fit enough to reach their goal their way.

Setting your own pace also has a side advantage of sometimes confounding or confusing competitors.

Rather than treating issues such as governance or equal opportunity as ‘add-ons’, built-in business fitness builds in a moral code. There’s an instinctive knowledge of right from wrong, of avoiding offers too good to be true, a faith in trusting numbers that actually add up. There’s time to consider and consult, without being swept up into a decision.

And setting your own pace, mentally and physically, reduces stress. There is no race to match those on trend beside you. Have the strength of mind and body to pace yourself.

This calm belief in persistently and consistently walking your own race may not suit those business owners and managers wanting a short-term results hit.

But those wanting a quarter-century achievement of goals (the time Ellis took to accumulate the seven, and a whole lot more, mountain climbs) or a half century (the Warren Buffett success of consistent, compounding company growth) might understand the Peter Ellis pace.

Business is too often compared to a Usain Bolt-like flash to win Olympic gold: all over in 9.6 seconds!

But the pace of most business (or business careers) is more like a several-decade walk that never ends, climbing one peak after another.

So rather than bursts of sprints, perhaps the steady, persistent stroll is a more considered pace for consistent business success.