How to run a business using iPad apps: Meet the consultant and coach who turned off her computer 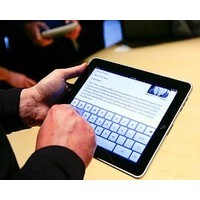 Could you run your business without your computer?

Melbourne-based technology consultant and coach Megan Iemma is trying to prove she can.

For 30 days, she’s barred herself from computer usage, instead relying on her tablet to get all her work done.

Iemma doesn’t have a smartphone. But she says the one device is all she needs. She hopes her experience will show other business owners their devices are useful for more than entertainment.

“A lot of people in business are just using their devices to play Candy Crush, which is just a waste of the device’s potential,” she tells SmartCompany. “But these days, my iPad is my primary device. And I wanted to show it could be used as a work tool.”

Iemma is six days into her experiment and says, so far, she’s been able to do everything she normally uses a computer for.

But it hasn’t always been straightforward.

“Mobile devices and the applications on them are becoming better and better, but sometimes, you do need to try two or three apps before you find one that does what you need,” she says.

The hardest thing, she reveals, has been editing documents. “When you’re used to Microsoft Office, it is hard to move,” she says. “But I have found a couple of good apps that allow me to edit Word documents.”

Tablet apps, she’s found, are also often less functional than the desktop ones.

“You can move files into Dropbox from your desktop just by dragging, but on mobile, while you’ve got the accessibility, it’s not quite as functional.”

But she’s encouraged by how it’s going, and thinks for some small businesses, running a business from a tablet just makes more sense than being chained to an office. “Consider tradespeople, for instance,” she says. “They have smartphones in their back pockets, but most aren’t using them effectively. They could really run their business from that.”

SmartCompany asked Iemma what applications she couldn’t live without. She nominated three.

“It’s a digital filing cabinet. For me, it’s about being able to find my notes and having everything in one place. I put voice recordings in there, text attachments, everything. And depending on whether you have the paid version or not, it gives you even more features. For me, Skitch is the ultimate part of Evernote. As a presenter and someone who writes material, I do all my presentations in Skitch. I take screenshots, draw arrows, drag things from emails into keynotes … the list goes on.”

IFTTT allows the user to make automated ‘recipes’. For example, when you favourite something on Twitter, it sends it to your Instapaper account to download and read later.

Iemma says she uses IFTTT to push all her ideas, gleaned from social networks, into one place (in her case, her Evernote account).

CloudOn is a free Microsoft Office editor for devices.

“It means I can edit my documents as long as they’re uploaded to Dropbox,” Iemma says.

“It’s widely used. I recently went to an accounting firm that has their staff room in a cafe. They all have iPads, and need to be able to take notes away from their computers. So they use CloudOn.”

Iemma is writing a daily post about her 30-day computer-free challenge at her blog.