Imitation or theft? The story of when BOB met TOM

They say imitation is the greatest form of flattery right? Heck – I even talk about the concept of “Rip off, expand and duplicate” in one of my books.

As an example, TOMS shoes was one of the first companies to pioneer the “one-for-one” concept. For each of their pairs of shoes you purchase, they’ll also donate another to a child in need.

TOM’s founder Blake Mycoskie has openly stated that he hopes others will copy the concept – and his wish has been granted, there have been numerous one-for-one organisations spawned worldwide (I’ve even partnered to set up my own directly inspired by TOM’s – Baby Teresa)

BUT – there has to be a difference between being inspired and blatantly ripping another person’s idea off.

I walked into a Skechers shoe store the other day and noticed a shoe design remarkably similar to the very distinctive “TOMS” shoe. The name of it: “BOBS”, and the concept “one for one donation”.

My first thought, given how identical they were, was that Skechers had partnered with TOMS, which I loved, but then on closer inspection of the packaging I found no reference to TOMS. A little online searching and I found the scathing negative publicity Skechers had received for so blatantly ripping off another, smaller organisation’s fabulous idea. To make it worse, Skechers, one of the largest shoe companies in the world, underpriced TOMS and then also initially launched with a two-for-one donation. 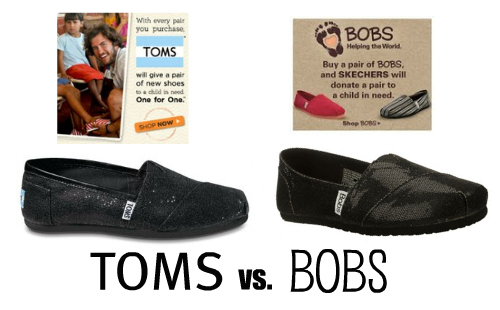 So, there’s inspiration and then there’s direct copying. One is flattering, the other is blatantly uncool.

So what are some ways to be inspired, without stealing?

1. My number one tip – look outside your own industry! Take inspiration from great service given to you at a hotel and work it into your hairdressing salon. See the poor service you receive at XYZ plumbing company and figure out how you can do the opposite in your retail store.

2. When I wrote about Terry Watson’s R&D (Rip off and duplicate) concept – I wrote RED (Rip off, expand and duplicate). If you want to incorporate a great idea into what you do – EXPAND on it, take the brilliance and make it better, stronger, sharper, more efficient. In short, make it your own.

3. Reference your inspiration or even go to them, where appropriate, and discuss how you’ve been inspired and get their go ahead to continue with the concept.

And how do you stop yourself from being copied? That’s harder still. The only real answers here are to be clear and consistent with your innovations – in many cases like TOMS v BOBS the public support will lean towards the original innovator. Short of that – when it’s a smaller innovation and not your entire business concept – keep on innovating!

And in closing, if your innovation is just a cheaper price, remember the old “We fix $6 haircuts story” (Google it if you don’t know it!)

Kirsty Dunphey is the youngest ever Australian Telstra Young Business Woman of the Year, author of two books and a passionate entrepreneur who started her first business at age 15 and opened her own real estate agency at 21.