Kiss & tell: When does your personal life threaten your professional one? 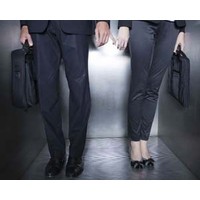 Where does our professional life end and our personal life begin? For the chief of the CIA, David Petraeus, the answer is clear. He has just handed in his badge after the FBI uncovered his affair with his biographer, Paula Broadwell.

Surprisingly often, workplace lawyer Andrew Douglas is ushered into a room quietly, usually by a CEO or the chair of the board, to discuss a delicate issue: a senior leader whose love life is, in one way or another, a threat to the company.

There are no rules, officially at least, that prohibit relationships between colleagues, or even extramarital affairs. In fact, 38% of people admit to having dated someone at the office, and at least a third of marriages start in the workplace, according to a 2011 survey by American job site, CareerBuilder.com.

“When I am called in,” says Douglas, “it is because those involved are highly-productive, very skilled and important people. The leadership understands that it is the intensity of the work; they simply fell into each other’s arms.”

Leaders can be on either side of the fence; they are either dealing with a report whose private life is impinging on work, or finding themselves mixing business and pleasure, and not knowing what to do about it.

Even when there is nothing illicit about a relationship, it can cause problems.

Is there anything wrong, for example, with a liaison between a Qantas corporate public relations executive, Olivia Wirth, and union leader Paul Howes, the national secretary of the Australian Workers Union?

There’s not a moral issue – both are unencumbered – but an engineering union reportedly sees it as a conflict of interest. The general manager of Australian Licenced Aircraft Engineers Association, Peter Somerville, told The Australian last week that Qantas and the AWU were fighting on the same side against his union over restructuring of jobs. “Even though we don’t have any evidence to support a claim that that’s got anything to do with the relationship …, let’s just say it’s not a good look.”

In the case of Petraeus, the secrecy of the affair might have made him a security risk, but Douglas says it also called into question his judgment. “A person who can’t be trusted with his own sexual proprietary can’t be trusted with secrets,” he says. “And he is in an environment [the USA] that is prudish about that sort of thing.”

Everyone understands the need for their behaviour at work to be consistent with the brand of the company they work for. A brand policy, once a document that pertained to the use of logos and corporate colours, is now a broader document in which corporate “values” are enshrined.

“Nearly all brands have integrity as part of their brand policy,” says Douglas. “When a relationship undermines brand relevance there will be serious discussions.”

The biggest area of personal risk in office relationships is breaching trust. “When we do equal-opportunity training, we explain there is no doubt that you must not breach trust relationships,” says Douglas.

Breaching trust can end in a sexual harassment case, even if the invitation is politely offered. “If I am 54, married with kids, and I ask a young 23-year-old grad out, that is absolutely forbidden,” says Douglas. This is because the power imbalance is so extreme, that the younger party cannot reasonably be expected to make an autonomous decision.

When to kiss and tell

Howes and Wirth decided to blow their own cover by stepping out together at last week’s Melbourne Cup, braving the public scrutiny, and generating headlines.

Earlier this year, Stephen MacMillan, the CEO of medical devices maker, Stryker Corp, lost his job after he allegedly revealed that he was involved in an office romance. MacMillan actually sought permission from his superiors to date the woman involved, the Wall Street Journal reported. The company granted permissions on the basis that the woman left the company, which she did, but MacMillan lost his job when it emerged later that the relationship started before she left.

Douglas says there is one absolutely clear-cut case for disclosure: when the relationship is between a leader and their report. “In a chain of command, the rest of the team feels the unfairness of the situation,” he says. “Any part of a business that allows itself to be subjected to gossip really is undermining the productivity of that area. People are going to spend their life talking about it.”

Training and good sense aside, work relationships happen. Often. Even those between older, married executives and those much their junior.

The most common response, and the least effective, is to turn a blind eye. Says Douglas: “The reality is that is that people don’t step in. No one is willing to press the button, especially when we are talking about a very senior person. No one wants to have the discussion.”

1. One or both parties leaves

The most common solution is for one or both parties to leave the workplace once a relationship forms, resolving reputational, leadership and conflict of interest issues in an instant. However, companies can still lose a lot. The leaving parties will take with them skills and experience, intellectual property and even clients.

2. Be very circumspect about building a relationship

If you fancy someone who reports to you, be very careful not to use your power to influence their feelings, says Douglas. For example? “Don’t take advantage after a few drinks, [or] don’t give your favourite girl all the best work and the others all the shit work.”

3. ‘Fess up the moment you form a relationship with someone who reports to you, or to whom you report.

5. Sign a “love contract”. Not common in Australia but used widely in the US and the UK, parties agree to a love contract agree that it is consensual, and to a course of action should the relationship break down.

6. Keep a tight watch on work functions and overtime. Most relationships start at after-work drinks, lunches, happy hours and late nights at work.