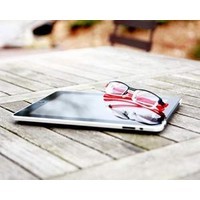 The time most of us spend looking at a screen has rapidly increased over the past decade. If we’re not at work on the computer, we’re likely to stay tuned into the online sphere via a smartphone or tablet. Shelves of books are being replaced by a single ebook reader; and television shows and movies are available anywhere, any time.

So what does all this extra screen time mean for our eyes?

Well, you’ll be pleased to hear that like many good eye myths, there is simply no evidence to support this old wives’ tale.

Once we reach the age of 10 years or so, it is practically impossible to injure the eyes by looking at something – the exception, of course, being staring at the sun or similarly bright objects. Earlier in life, what we look at – or rather, how clearly we see – can affect our vision because the neural pathways between the eye and brain are still developing.

When we read off a piece of paper, light from the ambient environment is reflected off the surface of the paper and into our eyes. The retina at the back of the eye captures the light and begins the process of converting it into a signal that the brain understands.

The process of reading from screens is similar, except that the light is emitted directly by the screen, rather than being reflected.

Some people worry about the “radiation” coming from screens but there’s nothing unhealthy about it. The radiation is, for the most part, just visible light, which is why we can see the screen in the first place. Most of the other emissions that lie outside of the visual spectrum are either low energy and unharmful, or absorbed by one of the front few layers of the eye, including the tear film.

In the past, people used to buy screen covers to dim the light being emitted from their screen. I suspect this did little more that dim the light – causing them to squint and strain. I like bright, shiny screens but the choice between a shiny and matt screen is really only one of personal preference.

Many people complain that prolonged periods looking at a screen gives them headaches and sore eyes. This is perhaps a reflection of the fact that, when looking at a screen and focusing on nearby objects, our eyes are not really doing what they’ve been designed for. The eye evolved predominantly to be able to look out over fields for potential food or for hungry lions, with the occasional requirement to look at things up close.

We can look up close when the lens inside the eye “accommodates”. This requires contraction of muscles inside the eye. When we fixate on a nearby object (say, a screen), we also must turn our eyes inwards. This is called convergence.

With hours on a screen, the muscles of accommodation and convergence can fatigue and give rise to the symptoms we know as eye strain. In my experience, this is one of the most common causes of headache in people who work on screens all day.

This is not to say that screens cause permanent harm – the symptoms should spontaneously resolve when you take a break. Otherwise, spectacles can do a little of the focusing work required to look at a screen.

Many people also report that their eyesight deteriorated shortly after starting a new (screen-based) job. Invariably, this coincides either with an increased reading (papers or a computer screen) or reaching middle age.

From the age of 12 or so, our ability to accommodate is gradually declining as the lens inside the eye stiffens. By the early 40s, accommodation has reduced to the point where reading up close can be problematic. Those stubborn enough to persist eventually present with eyestrain.

The next question about reading from a screen is “does size matter”?

The answer is probably not. If the reader is able to focus on the screen (by accommodating, assisted by the correct spectacle prescription or a combination of the two), then font size won’t be an issue. When not impaired by eye disease of optics, the human eye can resolve right down to phone-book sized letters and smaller.

If anything, the increased brightness of your smart phone or e-book will help you to see the fine print.

I admit that when a friend of mine suggested that I start to read on a tablet, I gave him the oft-heard response, “I prefer the feel of books” or one of its many variants.

But I have since changed my tune, and I confess to being a fully-fledged e-book addict. Not only has buying books become something I can do 24/7, but I can now read in bed without annoying my wife by keeping the light on!

Harrison Weisinger is the Foundation Director of Optometry Studies at Deakin University.