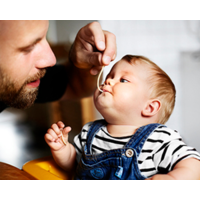 The new paternity leave scheme that started on January 1 may be cheap and still have a significant impact. It offers new fathers two weeks’ leave at minimum wage, which is only a fraction of what new dads in Sweden and Norway are paid, but its focus on fathers bonding with their babies may bring about a major shift in the way we see parenting.

Father-baby bonding is a key selling point for the new Dad and Partner Pay scheme. Cherubic infants with their dads feature strongly in promotions for the scheme. Human Services Minister Jenny Macklin and her department stress the benefits of fathers having “time off work, helping them bond with their new child and be involved in their care from an early age.” New fathers are urged to visit parenting websites for tips on how to bond.

Dads helping mum is also part of the pitch. This fits with the way that the Productivity Commission’s inquiry into paid parental leave saw it; the commission took note of the many submissions urging support for fathers’ role. But the main argument, it said, was the economic benefit of healthier, more productive mothers.

In its findings, the Productivity Commission relied on the notion of “primary carer” inherited from earlier leave decisions made by the Australian Industrial Relations Commission. When men gained the right to 52 weeks’ unpaid parental leave in 1990 (just 11 years after women did), mothers and fathers were barred from taking leave together. The only exception was for one week at the time of the birth. The primary carer model means dividing up, not sharing, the parenting time.

Our first paid parental leave scheme in 2011 used the same approach. Dads were included, as optional parents. The mother could opt to give some of the 18 weeks to the dad, but only if she went back to work. It was known before the act was drafted that this wouldn’t wash. In a similar New Zealand scheme just 1% of mothers transferred their leave to the fathers. Australian figures were the same.

Stressing fathers’ bonding in the Dad and Partner Pay scheme seems to be a feel-good device to get dads to sign up. But it may also flag a real change in the way we see parenting. Urging dads to emotionally connect with their baby rather than to just look after them breaks new ground by putting value on the fathers’ relationship with the infant.

It also puts policy in line with the hard evidence we now have of the importance of fathers for young children’s growth.

Recent Australian studies have shown, for example, that in the area of postnatal depression, sad dads pose the same risk for infants as do sad mums. Children whose fathers are depressed after the birth have twice the risk of behavioural problems, even allowing for the mother’s mood.

This has prompted health department seminars to examine the mental health needs of dads and their babies and Beyondblue to fund extra dad-focused resources for new families.

Long-term effects won’t be part of the first review of the scheme which reports next year. Rather, it will provide the time to discuss how to fine tune or even expand the leave. And there’s a catch when we do come to test fathers’ part of the scheme. The baseline survey designed for the 2011 parental leave scheme also used the primary carer model so only mothers were included.

Whatever the review finds, it seems unlikely that we will try to catch up to the levels of paid leave in Sweden. They are now debating an increase in the daddy quota from two months to three, paid at 80% of salary. We could, however, adopt less costly ways to support new fathers.

The British idea of dads’ right to unpaid leave to attend antenatal visits is one example of a dad-friendly measure. So is the Swedish bonus that is paid for every day of shared leave taken by the father. This is in line with Sweden’s goal of gender equity; they see having fathers share the care of infants as one way to balance gender roles at home.

As critics of our paid leave scheme have pointed out, offering nine times more leave for mothers than fathers is not exactly a gender equity message.

On the father-baby bonding front, there are other policy areas to consider. The Council of Australian Governments’ project to boost parents’ grasp of how children develop is one example. The brain science information that will be part of this project is perfect for showing dads why playing peekaboo matters.

There’s no doubt that the Dad and Partner Pay scheme is an important first step for Australian fathers and their families. Its most telling aspect may be the focus on dads forming a loving bond with their baby.

Richard Fletcher is a senior lecturer, Faculty of Health, at University of Newcastle.