No, you are not ‘running late’ – you are rude and selfish 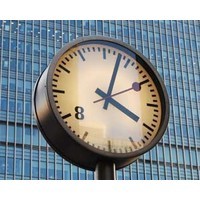 This may offend some readers. But only because it’s going to cut close to the bone for many.

And I don’t care if I sound old-fashioned, because actually it’s nothing to do with ‘fashion’ or ‘generation’. It’s got everything to do with basic good manners and respect for other people.

So here goes: how did it get to be “OK” for people to be late for everything?

Because as far as I am concerned, it’s not OK.

In recent years it seems that a meeting set to start at 9am, for some people, means in the general vicinity of any time which starts with the numeral ‘9’. Like 9.30, for example. People drift in at 9.10 or 9.20, or even later. And they smile warmly at the waiting group, as they unwrap their bacon sandwich, apparently totally unconcerned that others have been there since five to nine, prepared and ready to start.

Ten people kept waiting in a meeting for 20 minutes, while some selfish prat idles his way via the coffee shop, is actually 20 minutes times 10, which is 200 minutes wasted – while you keep us waiting because you did not catch the earlier bus. That is more than hours wasted. By you! How much has that cost the business? Shall I send you an invoice?

And an arrangement to meet someone for a business meeting at a coffee shop at 3pm, more often than not, means at 3.10pm you get a text saying ‘I am five minutes away’ which inevitably means 10 minutes, and so you wait for 15 or 20 minutes, kicking your heels in frustration.

And often these ‘latecomers’ are people who have requested the meeting in the first place, are asking for your help, or are selling something. Fat chance, mate!

And it’s not only business.

Why do people, invited for a dinner party at 7.30pm, think it’s cool to arrive at 8.30pm? It’s rude. It’s inconsiderate. And it’s selfish, as I witnessed in a coffee shop near my home one weekend. Three “ladies who lunch” were chatting loudly at the table next to me. One inquired what time the ‘drinks do’ was that night. The reply for all the world to hear was ‘Oh 7.30, but we won’t get there till 9 because by then it will have warmed up and all the interesting people will have arrived’. Nice. Imagine if everyone took that view. Cocktail parties would start at 3am, eventually.