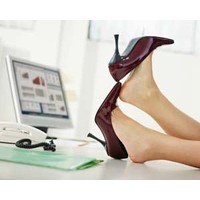 OK, I know it was a while ago, but we have to talk about “the heels”. I’m talking about when our Prime Minister, Julia Gillard, went bottom over bosom while touring India last month. She stepped onto some lawn (where was the red carpet!) as she was walking into an official function. Something went horribly wrong, and she fell.

I didn’t want to watch the replays, over and over, but I just couldn’t help myself. I sat there, rigid with a mix of horror and incredible relief that the person looking stupid across every TV set in the world was not me. I mean, we all have that fear – the recurring dream of going to school without any clothes on, or the fear of throwing up in the middle of an important meeting (that’s mine).

So, it wasn’t an international incident or anything, but I couldn’t help thinking it would never have happened if Gillard didn’t have heels on. Prime Minister Gillard’s heels were, as always, small and wide – a mere gesture towards the notion of fashion. And yet, let’s face it: Gillard did not have the option to wear boots, or big, flat, steady shoes. She’s already come under fire for the tailoring of her jackets – thanks to that paragon of fashion, feminist Germaine Greer (strike a blow, sister). Turning up in her Doc Martens was going to save Gillard the embarrassment of a tumble, but it would draw fire from the world’s police of perfection.

The point of all this – yes, there is a point – is that men in power do not appear to conform to such tight image standards. Typically, they are straining at the girth and thinning on top. Not that there is anything wrong with that – some of my best friends are bald or tubby, or both.

But we accept, nay, I suggest we expect, the idea that women in power must be trim, tailored, with nicely groomed coifs, able to command power and authority despite having to negotiate the earth’s surface balancing on two smallish points of contact.

It’s (almost) enough to make me fond of our nation’s wealthiest woman, Gina Rinehart, who is letting the team down quite marvellously with her unruly locks, spare tyres and tuckshop arms.

Even my virtual mentor, Lois P. Frankel, author of the career woman’s bible, Nice girls don’t get the corner office, says that we won’t get to the top if we dress inappropriately, wear inappropriate make-up and have the wrong hairstyle. (Frankel makes some other excellent points about appearance, however, that I do agree with, such as not sitting on your foot, tilting your head or smiling at all the wrong moments.)

I’m kind of looking forward to the day that a future prime minister comes to power wearing a wrinkled skirt, work boots, torn stockings, purple hair and a broken tooth.

I’m all for health and vitality, but I think it is time we collectively lowered our standards for the dress standards of women. I’d like to see women entering the board room with a bit of a bulge, with their cleavage showing, and their hair flowing about (the long hair of the US Secretary of State, Hillary Clinton, is helping with this change, I think).

Alternatively, perhaps we shouldn’t give the guy a promotion unless he loses 20 kilos, waxes the hair off the back of his hands, and pays twice as much for his suit.