The problem at the heart of changing habits

For many of us, living a healthy life is often a question of the choices we make – how we choose to spend our time and money, what we choose to eat and drink and who we choose to hang out with.

But it’s not only what we choose, it’s when, because choices we make in the moment are often different to those we make for our future selves. I might decide, for example, to eat more healthily but then choose in the moment to break this objective by eating chocolate.

This is something I’ve struggled with, and I know I’m not alone. My ‘Now Me’ consistently undermines my ‘Future Me’.

We’re talking here about the behavioural principle of short-term bias (also known as present or inter-temporal bias), where the needs of now trump the needs of later. 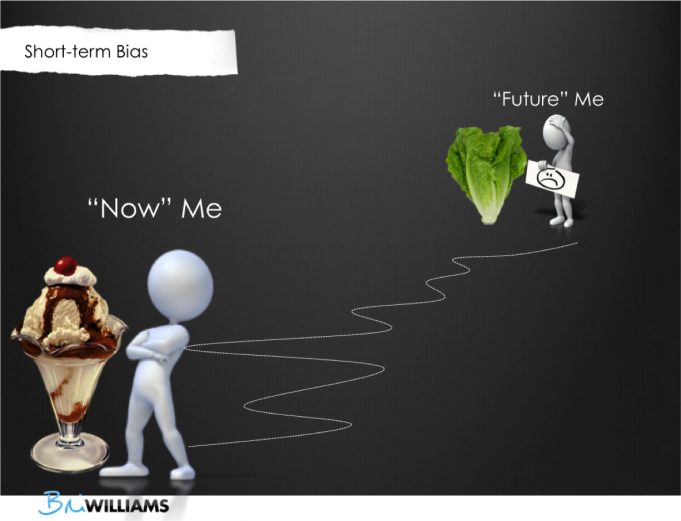 Now Me wants to eat ice-cream, Future Me can eat salad for the rest of the week.

Now Me wants to buy shoes, Future Me can worry about superannuation.

Now Me wants to check social media, Future Me can write that blog.

We do this for a number of reasons, which I’ll get to in a minute.

The upshot is short-term bias is a problem when you are trying to change habits because it’s all about the future gain and immediate pain. In short:

Now Me vs. Future Me

Behavioural researchers have shed light on why we keep treating our current and future selves differently.

It seems we think Future Me will be more likely to do the right thing. Researchers Hanks, Just and Wansink, for instance, were interested in how short-term bias interfered with healthy eating. In their study, school children who pre-ordered a meal, which Future Me would have to eat, chose the healthy option 29% of the time. When others were asked to order a meal on the spot, which Now Me would eat, this time only 15% opted for the healthy option.

We are even likely to think we will want to think more in the future. In a study by Read, Loewenstein and Kalyanaraman, people were more likely to choose high-brow or earnest movies (like Moonlight or Schindler’s List) when they were planning what to watch in three days time. When they were asked to choose something to watch that night they were more likely to go with something easy (like Sleepless in Seattle). This tells us we tend to overestimate Future Me’s desire to think.

When it comes to habits, the lesson is we tend to think Future Me will act in a way that, in reality, Now Me will not. We therefore have to trick ourselves into aligning the goals of Future and Now Me if we want to make change.

Another issue when it comes to modifying our behaviour is dealing with the very concrete world of Now Me compared with the fuzzy, abstract world of Future Me. Say you’re trying to give up smoking. Rationally you might know smoking can shorten Future Me’s life, but that’s a very distant proposition that you may struggle to imagine. What is easy to imagine is the pain of withdrawal – the headaches and irritation – because that will impact you in the short term.

In 2011, Hershfield, Goldstein et al. probed this issue as it relates to financial decision-making. Their hypothesis was if people could see their future self, they would be more likely to save money on their own behalf. 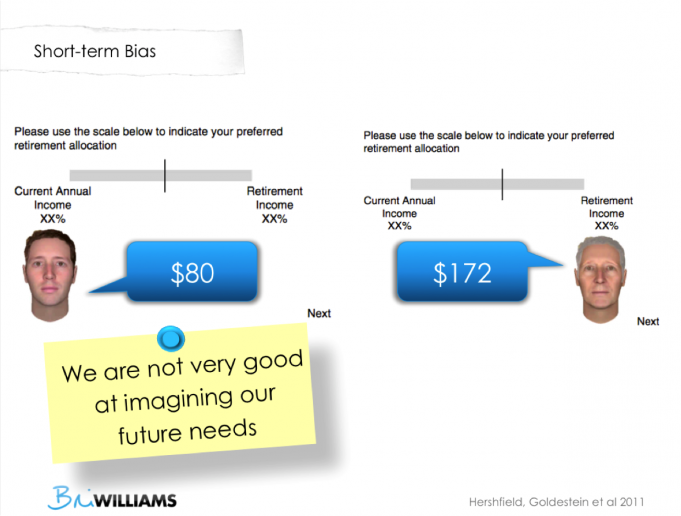 Creating a digital “avatar” by aging a photo of each participant, they found people looking at their future self-contributed more than twice as much money to a retirement fund than people who looked at a photo of their current self.

The lesson is we struggle to imagine ourselves in the future, and so it is hard to empathise with Future Me’s needs. For habits, it means we need to invest more time and energy in visualising the future if we want those needs to register in the present.

Changing habits without being undermined by Now Me

The problem we’re grappling with is getting Now Me to act in Future Me’s interests. Here’s how.

A trap many people fall into when creating a new habit (e.g. eating better) is to focus on an outcome (e.g. weight loss). The problem is the outcome is a future-state, and is likely to feel too far away and fuzzy to make an impact on a day-to-day, Now Me basis. After all, if my goal is to lose weight (something that only happens over time and seems a little mysterious) it will be very difficult to prioritise that over the ice-cream that is right here, right now.

So what can we do? Focus on the immediate term benefits of the new behaviour. What will make you feel good about your new choice every time you make it?

If eating better is your new habit, make it easy for Now Me by setting a goal of three serves of fruit or vegetables each day, for example. While this may be less than what nutritional guidelines recommend, if you are starting from scratch, start small. It’s easier to monitor your progress on a per-meal and per-day basis rather than relying on future weight goals because your behaviour (eating) will be more closely related to your goal (three serves) and you will feel like you have more control.

Another idea is to boost the Now Me pleasure you get from eating healthier food by reinforcing your choice. Healthy food usually looks spectacular, so why not take a photo and post it on social media? It’s not about getting likes (though that would be nice), it’s about you visually reinforcing your new behaviour.

If exercise is the habit you are working on, choose one you enjoy rather than looking for results. Years ago I was intimidated by the gym – all those machines and people who seemed to know what they were doing! So instead I started attending a Zumba class at the gym – it was fun, it got me into the habit of going there and now I am a committed gym goer. Importantly, my Now Me was the one who I catered for – Future Me was a happy beneficiary.

If you are trying to get into the habit of saving more money – a future benefit with an immediate downside – your success will rely on getting a buzz from watching that balance grow. Set up your direct debits to channel money into a saver account so that Now Me won’t even miss the money.  This is known as a “commitment device”, where you make a decision ahead of time which commits you to a course of action (like pre-ordering a healthy meal in the research above). By the time the future rolls around and becomes Now Me, the decision has already been made.

Regardless of what your desired new good habit is, the key is to always find a short-term benefit, and not rely on it being good for you down the track. But is the same true when it comes to breaking bad habits?

The best way to break a bad habit is to replace it with a good habit, so some of the same techniques above are applicable. In short, you can’t rely on a future benefit in order to change in the present.

One approach is to shame Now Me into acting for Future Me’s benefit. To do so means asking yourself what the ramifications are for Now Me of not changing. What this does is help your Now Me connect with your Future Me, and align their goals.

A word of warning though – this motivation to break a bad habit will be temporary so you need to act quickly to set the changes in motion. Before you know it, Now Me will be making all kinds of excuses to revert (“I’ll start next week”, “One won’t hurt”, or “I’ve been good all week” etc.).

Another tip when breaking a bad habit is to avoid feeling like you are a martyr. When your Now Me is offered a choice, instead of saying “I can’t…drink coffee/smoke/eat dessert”, which puts you in an unpleasant state of depravation, say “I don’t…drink coffee/smoke/eat dessert”. Researchers Patrick and Hagtvedt found this “empowered refusal” was an effective way to motivate adherence to change.

Now Me is the secret to your future

What’s clear from what we’ve covered is changing habits is not a simple matter, and just because we’ve made a decision at one point in time doesn’t necessarily mean we will adhere to that choice at another. There’s more to be said, and in a future article I will cover moral licensing and why we may be good generally, but bad occasionally. For now though, in the lead up to Christmas and those precarious New Year’s resolutions, focus on mastering Now Me and your Future Me will thank you.