Rich Pickings: An on-the-money guide to the Melbourne Cup 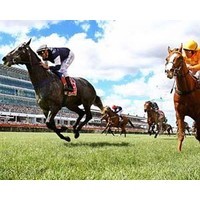 One of the reasons the Melbourne Cup is loved so much by Australians is that it is an egalitarian race. Unlike many of the top races around the world, the Cup is a handicap – horses receive different weights depending on their form, and thus the field is theoretically even as it leaves the starting gates.

In the folklore of the Cup, the handicapping system gives everyone a chance to win – wealthy owners with a stable full of stars have the same chance as the proverbial battler from the bush.

But the great theory of egalitarianism is being increasingly tested as the Cup is flooded by an army of horses from overseas.

As the quality of Australian horses has fallen away in recent years, wealthy owners and breeders from Europe have been targeting our great race.

At the same time, Australian owners have started scouring European racetracks looking for promising stayers who can be imported and aimed at the Cup.

The result is that getting a horse into the Cup field has become an expensive business.

Overseas owners must meet the cost of bringing a horse to Australia; it can run into the tens of thousands of dollars. Once upon a time, when racing authorities were trying to attract horses to the Cup, they helped defray some of these costs. The popularity of the race means this is no longer necessary.

Australian owners looking to import a European stayer also face high costs. A few years ago, finding a bargain-basement prospect in Europe was possible. But not these days.

“It’s a fairytale that is not going to happen again,” Ryan said last week.

“Every time a trainer [in Europe] gets a phone call from an Australian, up goes the price.”

He says trying to buy a horse of Americain’s quality would now cost $1 million. That suggests that the Melbourne Cup is now less for the battlers from the bush and more for the bluebloods.

With this in mind, it’s time for our annual Melbourne Cup form guide, where the owner’s form is just as important as the horse’s:

Gerry Ryan was valued at $295 million on this year’s BRW Rich 200 list, a product of his Jayco caravan manufacturing business and his staged entertainment business that is most famous for producing Walking With Dinosaurs. Americain, which won the Cup in 2010 and ran an unlucky fourth last year, is seen as a great chance to become one of the few horses to win the race twice.