Rich Tales: On the car crash that is the Rich Kids Of Instagram 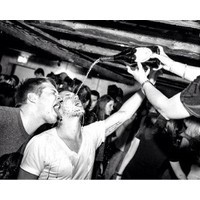 For one, their things are shinier. And thanks to Instagram, we get to see how much shinier.

Almost a year ago, an unknown group of people got drunk on white wine and decided to start a blog.

They called it the Rich Kids Of Instagram, and use it to catalogue the luxury, power and sheltered cluelessness one can find by trawling online photo-sharing service Instagram.

They found a treasure trove of content: the ostentatious young staring sultrily from their pools; gleefully rolling around in money on their four-poster beds; striking a pose from the doors of their private jets; or nonchalantly bathing themselves in $5000 bottles of champagne. Often, the pictures are not of people at all, but of the objects they own – status symbols so over-the-top most millionaires would think twice before donning them in public.

But that’s the point, really. The RKOI are often too young to have made the money themselves (though some could conceivably work in finance). It’s the children of millionaires who are flaunting the wealth.

Last August, the son of technology entrepreneur Michael Dell was featured on the website, after his sister posted a photo of him enjoying a feast on the Dell family jet during a flight to Fiji.

Michael Dell didn’t approve, and the photo was quickly removed. Most media outlets at the time linked this to the fact that he spends millions a year on his family’s security, which is compromised if anyone can merely fire up his daughter’s Instagram account to see where the children are this week.

Since then, the site has aroused less controversy, but against expectations it’s still going strong, publishing a photo a day, each linking back to the original Instagram profile it came from.

I emailed its founders through the address listed on the website to ask them whether most people were unhappy about being included.

Not at all, the unknown responder wrote, adding that when someone wanted a photo removed, it was removed promptly, though this was fairly rare.

“Frankly, we get a good bit of thank-you emails,” he or she wrote. “We [also] get plenty of submissions from all over the world.”

This is what’s most upsetting about the website, which, like a car crash, I can’t stop looking at. I wonder if these kids are aware that their pocket money could send a dozen of their compatriots through college, or feed an African family for life. Naturally, they are aware – otherwise they wouldn’t be posing.

Of course, I can’t talk. According to the Global Rich List, which allows you to compare your own income and assets to that of the whole world, I am in the global 1% – despite being far from wealthy by Australian standards.

Most of my wealth came from factors outside of my control (I had the opportunity to learn English while still quite young, opening up a realm of high-paying job opportunities for me), but nonetheless, I wouldn’t say I’m ashamed of it. I, along with everyone else, believe I’ve worked hard for my money.

But, on the other hand, I know my wealth is powerful. Powerful enough to change my life. It means I get to make choices about my own future, and it’s powerful enough to, in part, transform the world into what I want it to be. If I had more money, I’d have more power, and what I could change would increase.

How we spend our money is the clearest signal we give the economy on the type of world we want. And while plenty have sneered at the RKOI, it’s not their money they’re blowing. It’s their parents.

Through things like the Giving Pledge, some of the world’s billionaires have promised to give away most of their money to charity during their lifetime, instead of bequeathing it to their children or to the makers of the world’s luxury products. RKOI is the alternative to this, and it’s pretty ugly.