Rich Tales: Why men have little chance of marrying into wealth 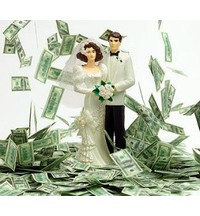 When the BRW Young Rich list was released earlier this month, it had a new millionaire.

Model Erica Baxter, who’s in the process of divorcing James Packer, will come out of the marriage far richer than she went into it. Her fortune is now pegged at $40 million by BRW, and it’s likely to grow even larger once the full settlement comes through.

Millionaire divorce settlements often impact on the wealth of some of the world’s richest people. And for women, divorce is an uncommon but not rare way to crack the rich list.

Britain’s Sunday Times list of the country’s 1000 richest people is notable for having its fair share of divorcees. Slavica Ecclestone topped the list’s ‘richest divorcees’ category after she was awarded an estimated £740 million ($1.2 billion) in 2009 in her divorce from formula one boss Bernie Ecclestone.

Other rich divorcees include Irina Malandina, who walked away with a reported £155 million ($199 million) in 2007 after divorcing Roman Abramovich, one of the richest men in the world.

While current dating preferences hold, however, it’s likely to be only women who benefit financially from divorcing rich listers.

This was recently driven home by a new survey by rich matchmaking site MillionaireMatch.com, which found the odds of marrying into wealth are far, far better for women.

The dating website conducted a random sample of nearly 15,000 of its members, and found millionaire men and women date very differently.

“We were very surprised to learn that the great majority of our male millionaire members sought non-millionaires,” says MillionaireMatch.com’s marketing manager Darren Shuster. “It seems that financially independent men want to share their wealth with those less fortunate.

“With women, the story is much different.”

Millionaire men said the reason they dated non-millionaires was because they wanted to date someone who appreciated their wealth, or because they enjoyed dating “younger, attractive women”.

Dating another millionaire was seen by the male respondents as asking for trouble, as female millionaires were perceived as likely to be “bossy” and “middle-aged”.

Rich women, on the other hand, were keen to date millionaires. One woman worth more than $100 million told MillionaireMatch.com she “wasn’t looking to take care of anybody”.

Most female respondents told the dating website they wanted to stay in control of their finances, and feared dating a non-millionaire would lead to having to make joint decisions about the millions they had earned. A desire to not carry the whole financial burden was another common reason given for not dating non-millionaires.

“Millionaire women expect their partners to contribute financially on the same level while seeking to protect their own wealth,” MillionaireMatch.com concluded.

There are far less rich women than there are rich men. But even if the numbers evened up, cultural attitudes mean it’ll be a very long time until we see any men leap into the rich lists after a divorce. It’s perhaps the only advantage women have over men when it comes to cracking the rich list.