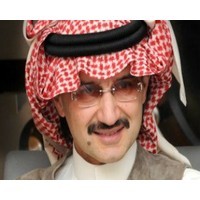 A friend once told me only the very wealthy or the very foolish sue for defamation.

Prince Alwaleed Bin Talal is certainly one of those things. He’s suing Forbes magazine over its annual billionaires ranking, which he says vastly underestimated the size of his fortune.

For decades, he’s had a testy relationship with the valuations team at Forbes, which publishes an annual ranking of the world’s billionaires.

That relationship appears now to have entirely broken down.

And last week, according to court documents seen and reported on by The Guardian, he launched a libel suit in London against Forbes, who he says underestimates his fortune by close to $10 billion.

In a statement, Forbes said it stood by its story.

“We’re very surprised at claims that Prince Alwaleed has decided to sue Forbes, particularly if he has done so in the United Kingdom, a jurisdiction that has nothing whatsoever to do with our recent story which raised questions about his claims about his wealth.

“The prince’s suit would be precisely the kind of libel tourism that the UK’s recently passed libel reform law is intended to thwart. We would anticipate that the London high court will agree.”

He is undoubtedly one of the world’s most image-conscious and self-promoting billionaires, comfortable using the Western media to flaunt his wealth.

Though his royalty provided some seed funding for his business (he is the nephew of King Abdullah of Saudi Arabia), he is largely self-made. His big break was in 1991 when he bet large on Citicorp, amassing an $800 million position when the company’s stock was down as it battled regulatory scrutiny. Citicorp shrugged off the watchdogs and Alwaleed’s stake ballooned in value, growing to $10 billion in 2005 (the shares crashed in 2008).

During this period, Alwaleed also made winning bets on Apple and eBay, and took to calling himself the world’s “foremost value investor”, a title many would be more likely to associate with Berkshire Hathaway founder Warren Buffett.

In recent years, however, Forbes has been increasingly sceptical of the Saudi prince’s wealth, saying the stock value of Kingdom Holding, which is listed in Saudi Arabia, always seems to balloon just before it compiles its annual billionaires ranking.

And in a March article which surely earned Alwaleed’s ire, Forbes senior editor Kerry Dolan detailed the lengths to which the prince went to ensure his wealth was well-represented on the list.

She depicted an image-conscious, eccentric billionaire, who measured his success by the amount of money he had, and was keen to have that success properly recognised by the West.

She said he would frequently blind-copy her on messages he sent to prominent people, and that any attempts to downplay or question his wealth were met with angry phone calls from executives at Kingdom Holding.

“Any reporter who shows an interest in Prince Alwaleed Bin Talal of Saudi Arabica can expect at some point to get a little gift from His Royal Highness,” she wrote. This ‘gift’ includes a leather-bound annual report of Kingdom Holding, as well as magazine covers of magazines like Vanity Fair and Time with the prince on the front cover. However, the magazine covers, Dolan writes, are concocted. “Rather than simply send out press clippings, the prince’s staff has concocted or rejiggered magazine covers, which they bind atop article mentions on beautiful high-gloss paper.”

Alwaleed had a good year in 2012, increasing his wealth 32% in the 12 months to October, according to Bloomberg. But according to the same index, which measures the wealth of the world’s billionaires daily, he’s down 7.3% this year.

Experts quoted by The Guardian say Alwaleed’s case against Forbes is unlikely to advance far. Which is a pity, if for no other reason than it would be fascinating to watch his wealth evaluated in court.