Scrapping carbon pricing: Can Abbott get it done? 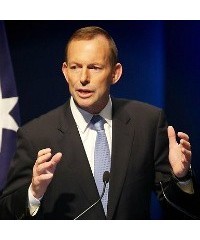 When the carbon tax was announced in the days following the 2010 election, then opposition leader Tony Abbott swore to get it repealed.

Three years later, having been delivered a clear majority in the House of Representatives, Abbott appears set to do so.

But the lack of a Coalition Senate majority means it’ll be far from straightforward.

“Mr Abbott can try to convince the ALP or Greens to support repealing the bill in the Senate – which is an unlikely outcome.

“Or Mr Abbott can wait until the new Senate takes its place on July 1, 2014 and negotiate with the motley crue of 18 crossbench senators – eight micro-party senators and 10 Greens. Again tricky.

“But, importantly, the new government has to by law to make a series of climate change decisions before July 1, 2014 to meet international obligations and other domestic requirements.”

Together, the Liberal and National parties are set to receive 33 seats in the 76-seat Senate. To get legislation through, they’ll need six votes from the eight independent to get to 39 – a majority in the Senate.

Labor will hold 25 Senate seats, while the Greens will hold another 10.

This means together, Labor and the Greens will not be able to block Coalition legislation.

Instead, the balance of power will be held by the eight micro-party senators, six of whom are newly elected.

Others are far newer to the whole thing.

New South Wales has sent along Liberal Democratic Party lead candidate David Leyonhjelm. He’s a libertarian who wouldn’t be well-disposed to the carbon tax. But he also wants action on guns (he wants them to be more freely available) and tax rates, which could see him play hardball with the government. According to The Australian, Leyonhjelm wants Abbott’s Direct Action climate policy scrapped. So does Family First’s Day.

Another two senators unlikely to unquestioningly give Abbott what he needs are Palmer United Party senators Glenn Lazarus and Jacqui Lambie. While Clive Palmer is no fan of the carbon tax, his candidate from Tasmania, Lambie, today said Abbott shouldn’t expect her support.

Worryingly for Abbott, Lambie doesn’t seem too keen on him.

“I think he’s got a very big ego and I imagine after my 10 years in the army, Tony Abbott and I will clash quite a bit,” she said.

“If he thinks Pauline Hanson was a pain in his rear-end in the past, I can assure you he hasn’t come up against Jacqui Lambie yet, and I’ll be going in hard.”

Abbott’s anti-carbon tax message was complicated somewhat when it was adopted, partially, by Kevin Rudd.

Shortly after becoming prime minister for the second time, Rudd said he would replace the carbon tax with a floating carbon price from July next year.

That might seem like quite a while away, but it’s likely to be sooner than the wait for the new Senate to be sworn in.

Senators are appointed for six-year terms, and over time the disjoint between this and the House of Representatives elections has been growing longer. Currently, it sits at 10 months.

The earliest Abbott can get legislation to repeal the carbon tax through the Senate is July 2014. Unless, of course, Labor or the Greens cut him some slack. It’s unlikely they would do so.

One way to get around this impasse would be for Abbott to call a double dissolution election – where the entire Senate as well as the House of Representatives is put to an election.

However, the lower threshold to getting on the Senate in a double dissolution election – there are twice as many Senate seats up for grabs – could deliver him a Senate with even more independents to deal with.

This means Abbott is going to be very reluctant to go down this route.