The secrets of getting on lists of world-changing entrepreneurs: the insiders tell 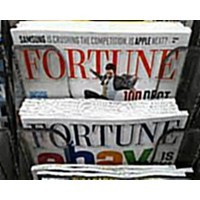 No story makes a bigger impact for Time than its person of the year. No accolade is bigger than a Nobel prize. Nothing opens doors like being branded ‘one to watch’.

For an entrepreneur, external recognition can be very useful.

Elisabete Miranda is the founder of American company CQ Fluency. Her first appearance on a list was one of rising entrepreneurs as chosen by accountancy firm Ernst & Young.

“In a small business, you are the brand, and you are the company,” she said in Istanbul on Tuesday. “It’s very hard to separate them. Once you raise your personal profile, it raises the profile of your company. That opens up a whole world of benefits.”

In addition to the networking opportunities, and the opportunities to speak at events and the like that often follow inclusion on the list, there can be a wider effect, said Jane Francisco of Canada’s largest women-focused publication Chatelaine, which runs a list of the 100 top Canadian female entrepreneurs.

“You get mired in the day-to-day,” she said. “You think about the time it takes to apply. But you need to put that time in – it’s worth it.

“Firstly, because less people apply than you think. You always think you won’t make it. But if you do, think of the benefits to your business and your employees. It creates pride in the organisation.

“When you’re on a list, the outside perception is that you’ve been endorsed. Therefore, that can open doors for you in your business. Even to things like banks. We’ve had people tell us the banks call them after they appear on a list. So it can open the door to potential funding.”
Jessi Hempel, a senior writer at Fortune magazine, says with plenty of lists, it’s not possible for people to nominate themselves.

“But I’ll tell you a dirty little secret – journalists are lazy. They go to people who are known already. By getting yourself onto some lists where you can nominate yourself, you put yourself on the radar.”

Of course, not all coverage is equal.

The entrepreneurs who gain the most from lists are the ones who are profiled in articles in the publication.

Getting on this shorter, more exclusive list is largely a matter of how well you write your application, says Francisco.

“I’ve seen instances where the business and the candidate are strong, and the judges want to select, but the application doesn’t live up to the others. They need to judge on the application.
“Sometimes it’s about having someone else write your application. That can be better – they can find what makes you more special. You don’t want to be one of 1000 on the list. You want to differentiate yourself.”

Lists are often segmented by things like gender, age or nationality. Hempel says that while entrepreneurs should apply broadly, they shouldn’t discount things like female-only lists.

“At Fortune, if you get on the front of our most powerful women list, there’s no more powerful real estate for a business executive.”

“It’s an unfortunate fact that some people feel this way, and to some degree it might be true. I think part of this journey is moving in a direction where more and more women make the main lists. And hopefully women’s lists don’t take away from the opportunity for that.”

Myriam Robin travelled to Istanbul as a guest of Dell, which paid for her flights and accommodation.