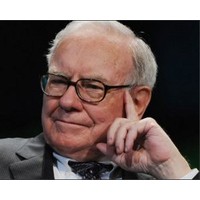 In 1982, when Berkshire Hathaway hosted its first shareholder meeting, just 15 shareholders turned up. Back then, a single share of the holding company sold for just $1000.

Today, a single share will set you back $162,000, and as the fortunes of the company have swelled, so have the numbers at its annual shareholder meeting.

On Saturday, 35,000 investors flocked to Nebraska, to an event called by some the Woodstock of business. They came from far and wide to hear the insights of a man known as the ‘Oracle of Omaha’ – the chairman of Berkshire Hathaway, Warren Buffett.

Here’s what he revealed this weekend.

1. If you want to succeed, start having fun

During the meeting, Buffett, along with his vice-chairman and long-time partner Charlie Munger, were asked what advice they would give to themselves 50 years ago.

“Find what turns you on,” Buffett said.

He said both he and Munger started off working in a grocery store, but neither of them stayed there for long.

“We were lucky to be in this country to start with. But we found things we like to do very early in life and then we pushed very hard in doing those things. But we were enjoying it while we did it. We have had so much fun running Berkshire it’s almost sinful. But we were lucky.

“My dad happened to be in a business (he was a stockbroker) that he didn’t find very interesting but I found very interesting. So when I would go down on Saturday there were a lot of books to read. You know, it just flowed from a very early age.”

2. How to explain Berkshire Hathaway to a 13-year-old

One investor asked Munger how he would explain his company to a child.

Munger responded: “We always tried to stay sane when other people, a lot of them, go crazy. That’s a competitive advantage.”

“This was a very good idea. I wish we had done it on purpose.”

3. Still no word on his successor, but son will become chairman

It’s widely understood the Berkshire Hathaway board has someone in mind to succeed Buffett when he leaves the company.

“The key is preserving a culture and having a successor, a CEO that will have more brains, more energy, more passion for it than even I have … We’re solidly in agreement as to who that individual should be,” Buffett said on Saturday.

But the billionaire investor refused to reveal the name of that individual.

He did offer some insight into how the process would go. His son, Howard Buffett, would take over as chairman of Berkshire Hathaway while his father’s replacement is settled in.

This decision was greeted with some scepticism. Buffett was asked what qualified his son to take on the role. Howard Buffett has never worked as an investor.

Buffet added that Howard is taking the role “in case a mistake is made” in choosing a CEO, the odds of which are “less than 1 in 100.”

4. He may be on Twitter but he’s no enthusiast

However, he was cautious about the role Twitter should play in the release of financial information, criticising the United States Securities and Exchanges Commission, which last month allowed companies to use social media to make key announcements to investors.

“The key to disclosure is accuracy and simultaneity … I do not want it, if I am buying Wells Fargo, to keep hitting up their web page and hoping I’m not 10 seconds behind someone else for some important announcement,” Buffett said.

5. Positive on America, not so much on Europe

Buffett had largely positive words to say about the actions of the American Federal Reserve, but he was far less complimentary about how the European Central Bank has handled the past few years.

The handling of the debt crisis by European leaders was “mixing rat poison with whipped cream”.

When it came to the actions of American policymakers, Buffett said there had been negatives, but he would have made similar decisions had it been his choice.

However, even though he knew what he liked and he didn’t, Buffett said he couldn’t see what would happen, saying we were in uncharted waters now.

“Like a good movie, I don’t know the ending,” he said.