Sydney and Melbourne in 10 most expensive cities, but Singapore tops the list 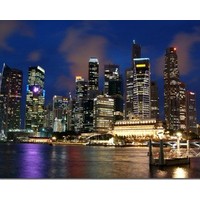 In what’s no surprise to Australians, Sydney and Melbourne have been ranked as two of the world’s 10 most expensive cities, with wine, cigarettes and petrol particularly expensive by global standards.

The most expensive city in the world was deemed to be Singapore, followed by Paris, Oslo and Zurich.

Rounding out the top 10 most expensive locations were Caracas, Geneva, Tokyo and Copenhagen.

“As well as Singapore there have been sustained increases in the cost of living in Australian cities, driven by the long-term appreciation of the Australian dollar,” the report says.

“As a result, Asian (and Australasian) locations made up one-half of the 10 most expensive cities last year.”

Over the past decade the Singaporean dollar has risen by 40%, which along with solid price inflation has resulted in Singapore moving steadily up the rankings, from 18th a decade ago to first.

“The city also has some structurally expensive items that skew the overall cost of living upwards. For example, car costs have very high related certificate of entitlement fees attached to them, which makes Singapore significantly more expensive than any other location when it comes to running a car,” the report says.

And while Melburnians frequently complain about the cost of transport, spare a thought for the Singaporeans whose transport costs are three times that of New York. It’s also the most expensive place in the world to buy clothes, with an abundance of luxury and European brands.

The survey of 140 cities assesses the cost of more than 160 products and services including drink, clothing, household supplies, rent, transport and utility costs.

While New York is used as the benchmark city for comparisons, its cost of living has only increased slightly this year, with the Big Apple moving into 26th overall.

“This is partly reflected by the stronger performance of cities around New York in the ranking, with European cities in particular buoyed by an appreciation of the euro over the last twelve months,” the report says.

On the opposite end of the spectrum, the world’s least expensive city was found to be Mumbai.

While Asia is responsible for some of the world’s most expensive cities, it’s also home to the cheapest.

“Within Asia the best value for money is in the Indian subcontinent (defined as India, Pakistan, Bangladesh, Nepal and Sri Lanka),” the report says.

“Mumbai is the cheapest location in the survey and three of the four cheapest cities surveyed hail from Pakistan, India and Nepal. These cities are only joined by Damascus because of the unfolding crisis in Syria and its impact on exchange rates.”

Karachi and New Delhi rank second and third on the cheapest cities list, while Damascus comes in fourth and Kathmandu also makes the top five.

These locations might be cheap, but they’re not cheerful. The chances are even people looking for a cheap holiday won’t consider travelling to many of these cities, as most are known for their security issues and civil unrest.