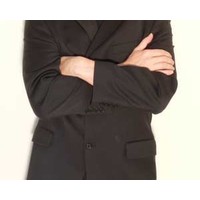 There I was, sitting in an audience of middle-level managers, listening to a talk about corporate etiquette and communication when it appeared – the dreaded slide on body language. For those who have not seen the slide, it looks something like this:

The importance of body language in communication

7% relates to the words we use

38% refers to your tone of voice

55% refers to your body language

I don’t know how many times I have seen this slide in presentations about communication but this time it was the straw that broke the camel’s back. I interrupted the speaker, telling her that the slide was not only wrong but the UCLA professor who first put forward the rules had since stated on the internet that his biggest regret in life was how his original experiment has been totally misquoted out of context.

The original work was done by Professor Albert Mehrabian and only relates to a situation where we are initially forming an attitude (like or dislike) of someone who in turn is talking about his or her feelings and emotions. The body language and tone of voice are what we mainly use to assess whether we like the person delivering the message. Of course this is important in the first minutes of a sales meeting or the start of a job interview. However, when those initial minutes have passed, content becomes far more important. Unfortunately, the 7%–38%–55% rule is perpetuated by speakers again and again.

In fact, establishing a credible first impression is often more about talking and less about moving. It is often better to use a slower, lower manner of speaking with fewer gestures. People subconsciously associate self-confidence and empathy with a controlled body style. If you are too enthusiastic and too smiley people will think you are either trying too hard to impress or too high on caffeine.

The speaker did give a number of useful tips about meeting people. Most people miss your name when introduced, so a useful tip is tell a short story about yourself where you use your first name. Something like “Then my boss said to me, ‘Chris I think you should consider selling as career.’”

The other tip was about how long you should maintain initial eye contact. The tip was to do so long enough to work out the colour of the person’s eyes.  Since then I have tried the technique several times. Again, this tip works brilliantly.

I reflected afterwards that I should not have interrupted the speaker and I demonstrated poor emotional intelligence.  However, I did whimsically think that if the 7%–38%–55% rule was true, the speaker should have done her presentation as a song and dance routine.  She did not – indeed her presentation would have been more like 70%-15%-15%.  And I did learn something.