The risks and rewards of a ‘career boomerang’ 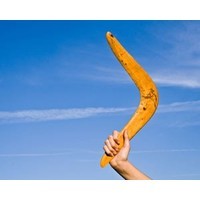 Cooke’s move to Tatts is also a step back into the world of gaming, an industry in which he maintains strong networks. Cooke worked in the gaming business before taking the top job at Wotif: he was head of strategy and general counsel at a gambling company UNiTAB until 2005, just before Unitab’s merger with Tatts.

A boomerang career move can be fraught with risks as well as benefits, says human resources expert, Kris Reynolds, from Let’s Talk Career. “When you have grown and developed in another sector and you step back, you have to reassert your credibility and reactivate that network,” Reynolds says. “You are going back to something that was comfortable three to five years ago.”

There is a lot for leaders to learn from Cooke’s career move.

Cooke will replace the outgoing CEO of Tatts, Dick McIlwain, who has been a personal mentor for the past 13 years. McIlwain was Cooke’s boss at UNiTAB from 1999 until the merger.

However, McIlwain had no involvement in Cooke’s recruitment to Tatts, the chair of Tatts Group, Harry Boon, has told The Australian Financial Review.

While not commenting directly on Cooke, Reynolds says it is wise to keep strong networks in the industry you are leaving. “When people move outside of their industry, they often have a suffered a disillusionment. But the grass isn’t always greener on the other side, and maintaining networks and maintaining currency is wise: stay in the industry association, read the journals, and know what is happening.”

Cooke is clearly delighted to be back on familiar territory, telling The Australian: “I understand the business and I feel like I am going home.”

People do have passions for particular sectors, and feel attuned to certain industries and work, Reynolds says. “When people follow that desire and love, they are more inclined to find that engagement and happiness.”

Reynolds recalls a senior executive who moved from the not-for-profit sector to try her very transferrable leadership skills in a private company. “She absolutely hated it. Her next role was back into a not-for-profit, but just the experience of trying something different validated the path she wanted to take.”

One big benefit of a career detour is the chance to bring back new skills and some ‘daring do’. Experience and exposure to another industry, to different sales techniques, technology, and business models can be fed back into the industry of origin.

“You come back into the industry with fresh eyes. Things that everyone assumed were not possible suddenly become very possible. You become the innovator,” says Reynolds.

The big risk of making a comeback is the risk of making too many assumptions. “It is not the same industry you left two, five or 10 years ago,” she says. “Your corporate memory stops the moment you leave.”

The key is to return with an open mind, to talk to people about what is happening now, the challenge of the day.

A second challenge is to identify the new talent, and how their key competencies for success have changed. Returnee leaders need to ask: ‘How do I need to modify myself, and others?’

After the initial flush of euphoria, leaders need to prepare for a reality check.

“We all tend to remember the past fondly, and assume it is going to be the same,” says Reynolds. “You need to be mindful that you haven’t romanticised the past.”