You deserve it: The world’s priciest Christmas gifts 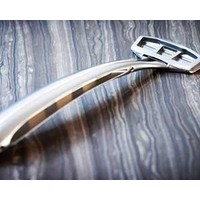 Choosing a Christmas gift is a delicate operation. When your loved ones have become accustomed to the best things in life, sometimes you need to think creatively. LeadingCompany has compiled a few ideas for the classy shopper this Christmas:

The most expensive tie in the world

Status symbol or phallic symbol, who cares; ties are cool. You can’t buy the most expensive tie in the world – valued at more than $220,000, or 10 million rupees – because it was custom-made for the Suashi Diamond group. But you can have a red hot go at a challenger with is a special pure silk gold and diamond encrusted one by a relatively new Indian fashion company, the Satya Paul Design Studio. First displayed at a fashion show titled “Cultural Ties” in Mumbai in October, 2003, and displayed on Bollywood film star Salman Khan, this pink silk tie patterned in 150 grams of gold is adorned with 271 diamonds weighing a total of 77 carats.

Most expensive razor in the world

The Zafirro Iridium, valued at $100,000, was created by American manufacturer Bright Light Ventures. The handle is made from near-pure iridium – one of the rarest elements present in the Earth’s crust – held in place with platinum screws. The blades are made of white sapphire, grown in a lab in the former Soviet Union. Perfect for the man who’s tired of razor burn.

Most expensive briefcase in the world

At about $15,000, you might think this briefcase is a bargain in the world of luxury goods. It’s designed by Beau Reid, an industrial design engineer, and custom-made of carbon fibre to match the paint and interior of your fabulous car. Thoughtful.

Most expensive wallet in the world

Luxury men brand, Dunhill, is also into the carbon fibres in its effort to create a near-indestructible wallet for a bargain $825. It has a fingerprint sensor that means if it is stolen, the thief can’t access your money and cards! And, as the scoundrel makes his or her getaway, as soon as they are five metres from your mobile, the Bluetooth proximity alarm will suddenly burst into action and scare the living daylights out of them. Cool.

Most expensive coffee beans in the world

Everyone loves a good cup of coffee in the morning, and if you’re drinking it, you might as well drink the best. Kopi Luwak, which sells at a cool $1,080 per kilogram, is an Indonesian bean which has been digested and “passed through” a small mammal called the Asian palm civet. It might only be for show though. According to the Specialty Coffee Association of America, “It just tastes bad”. D’uh!