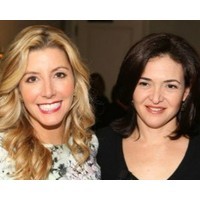 Forbes has just released its annual list of the world’s richest billionaires, including a 25% increase in female representation from last year’s list.

Of the 1645 billionaires in the world, 172 are women according to Forbes, setting a new record despite the ‘Billionaire Ladies Club’ still accounting for just 10% of the entire list.

There are 42 women among the 268 newcomers, although only a handful of those built their own fortune. Of the entire list, there are just 32 female billionaires (1.9% of all the world’s richest) who self-crafted their own fortune.

Among the pack of self-made billionaires to join list stalwarts including Meg Whitman, Oprah and Spanx founder Sara Blakely (pictured with Sandberg above), is Facebook COO Sheryl Sandberg. She added to her fortune with Facebook stocks and the release of her working woman’s guide Lean In. Sandberg is also among the world’s youngest self-made billionaires and joins one other woman (Whitman) as a female tech billionaire.

Other women to join the list with a self-made fortune include Folorunsho Alakija, who is Nigeria’s first female billionaire with her lucrative oil-producing company earning her a fortune of $2.5 billion, and the co-CEO of online gambling site Bet365, Denise Coates.

Walton just edged out L’Oreal heiress Liliane Bettencourt, who is worth $34.5 billion. Gina Rinehart is still Australia’s wealthiest person, and comes in at number five of the world’s most wealthy women with a fortune of $17.7 billion.

Meet some of the newest female billionaires

Sandra Ortega ($6.1 billion)
Ortega is the daughter of Amancio Ortego, founder of clothing giant Inditex (founder of Zara). After her mother’s death in 2013, Ortega inherited a stake in the clothing giant, making her one of the richest women in the world. She now spends her time working for an NFP which provides vocational training for people with disabilities.

Folorunsho Alakija ($2.5 billion)
Thanks to her lucrative oil-producing asset, Alakija is Nigeria’s first female billionaire. She worked at a Nigerian bank in the 1970s before moving to study fashion in the UK, and then founding Supreme Stitches, a Nigerian fashion label. She was awarded an oil-prospecting licence in 1993 and later created Famfa Oil, which went on to become Nigeria’s most prolific oil block.

Sheryl Sandberg, ($1.05 billion)
The COO of social networking giant Facebook is perhaps the most well-known woman on the list. Sandberg, who released her 2013 Lean In: Women, Work and the Will to Lead, has led much of the conversation about working women over the past 12 months, and owes much of her fortune to her 4.7 million stock options in Facebook. Amassing a billion-dollar fortune in 2013, she is now one of the youngest billionaires in the US.

Denise Coates ($1.6 billion)
Along with her brother, Coates is the co-CEO of one of the most highly profitable online gambling sites. Founded by Denise in 2001, when she developed a betting platform and trading team online, the platform has gone on to become one of the world’s largest online gambling companies. Coates is arguably Britain’s most successful self-made businesswoman.

Aerin Lauder Zinterhofer ($1.1 billion) and Jane Lauder ($1 billion)
Granddaughters of the cosmetic queen Estee Lauder, both of these women have amassed a huge personal fortune, joining the ranks of the youngest US billionaires after the transfer of shares in the family’s cosmetic giant. While Zinterhofer presides over her own lifestyle brand, which operates as a separate company, she is the image and style director of Estee Lauder. Jane Lauder takes the helm of the Estee Lauder’s iconic Clinique brand as global brand president.