Michael Page Recruitment has been forced to apologise and launch an internal company investigation, after a group of Melbourne recruiters threw a wild party at a Victorian ski resort.

Michael Page has launched internal investigations after an open letter penned by Stephanie Sparrow from the Reindeer Ski Club at Mt Buller went viral over the weekend.

In the letter, Sparrow says 22 guests allegedly from Michael Page subjected the operators of the ski club to a weekend of alcohol-fuelled rage and animosity.

Sparrow and her father, who manage the ski club, were sharing a communal living space with these guests when things started to go haywire.

“We were woken no less than four times by guests who chose to come into our room,” she said.

Sparrow goes on to list a litany of alleged disgraceful behaviour on the part of the group, including “vicious banging” on their bedroom door, rubbish, food and broken glass left everywhere, profanities, and threats and verbal abuse directed at Sparrow and her father. 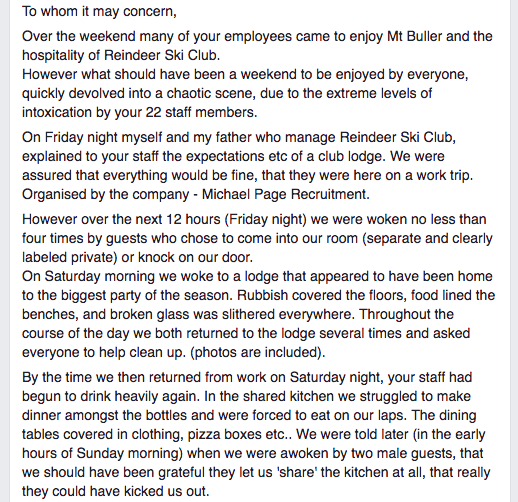 Part of the open letter to Michael Page Recruitment, posted on Facebook

In a public statement, Michael Page claimed the weekend trip was not a company-funded trip but said its staff members were involved in the incident.

“We are extremely upset about the behaviour of some of our employees and make no excuses for their actions,” the company said.

“We have been in touch directly with the people who were affected by the behaviour of the individuals involved, and offered our unreserved apologies. We are very disturbed by the allegations made.

“We are undertaking a thorough investigation into the matter and will make sure that all the individuals involved are interviewed and the appropriate disciplinary action will be taken.”

“How did it happen? Why? What is our culture? What’s our stance on how we behave?”

“They should be jumping on that straight away.”

In her claims, Sparrow alleges a senior member of staff was one of the most aggressive culprits.

“This sort of behaviour can very often be driven from the top,” Watts says.

“The leaders and the top level need to have absolute responsibility for leading by example.”

Watts says there should be clear communication on how all employees are expected to behave, not just at parties but also when out in the public.

Employees should know that when they’re out in public as staff or talking about business, they are representing a brand and an organisation, Watts says.

“We have heard stories about people talking about a client on the plane or train and people overhearing,” she says.

“I believe you can have training and communication about staff on this.”

Reconsider how to run workplace celebrations

Though employers don’t need to be “party police”, Watts says the incident does raise the question of how some companies celebrate together.

“Workplaces should be looking at different team get-togethers and celebrations without excessive alcohol consumption and big parties,” she says.

“What other ways can we bring in teams together to celebrate and bond?

“If someone was hurt [at the Mt Buller resort], there’s a huge risk there for this company.”

Good of you to get the employees side of the story there. Someone grooming on Facebook must be true