Mark Zuckerberg’s one rule for hiring the best employees 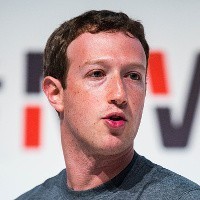 Facebook founder Mark Zuckerberg has one rule when it comes to hiring staff and he says it has “served me pretty well”.

So what is the entrepreneur’s secret?

“I would only hire someone to work directly for me if I would work for that person,” Zuckerberg told an audience at this week’s Mobile World Congress, according to Inc.

“It’s been a pretty good heuristic for me … I think as long as you have that as your rule for picking the people you work with, you’re not going to go wrong.”

Zuckerberg gave the example of Facebook chief operating officer Sheryl Sandberg as someone he would happily work under “if Facebook disappeared and I had to find something else to do”.

He told those at the Barcelona event all companies, especially ones that are growing quickly, should have a deliberate strategy for finding the best employees because the amount of work that needs to be done outweighs the number of people they have to do it.

But while companies could choose to “compromise on quality today and get a little more work done over the next six months”, it won’t pay off in the long run, Zuckerberg said.

“In a small business, we tend to hire for lower level roles so [Zuckerberg’s rule] may not necessarily apply … but what I tell my clients is to make sure you hire people you like to work with,” Watts told SmartCompany.

“If you’re at your staff Christmas party and you’re sitting next to someone you don’t want to sit next to, why are they working in your business?”

Watts believes small businesses should also follow Zuckerberg’s advice not to compromise on the quality of the employees they hire just for short-term gains.

“We see it all the time, people come to us for help recruiting and they say we need someone as quick as possible,” Watts says.

“But we don’t like that approach because from an HR point-of-view, we know there will be ramifications in three months’ time.”

“It’s great if you can hire quickly and they turn out to be a gun … But it’s really hard to take the time to get the right person and that’s why forward planning is so, so important.”

Watts says businesses must also “truly understand” the type of employee they are searching for, rather than immediately replacing an existing role.

“Clients come to us and say this is what I need but when we ask questions for further clarification, it turns out that’s not what they need at all,” Watts says.

“It’s a luxury to take that time but if you can run your business with that luxury, it will pay off.”