Could photo-sharing application Snapchat uncover your next star employee? Fast-food giant McDonald’s thinks it could, and is hoping to attract a talented millennial workforce by introducing Snapchat-based job applications.

Dubbed the “Snaplication”, the company has invited users to use Snapchat to get in touch with the corporation, use a unique lens overlay of a McDonald’s crew badge and hat, and send in a 10-second submission to the “Maccas” Snapchat account.

The company says the video is then “reviewed”, before users are sent back a link directing them to the company’s online careers hub.

McDonald’s says the process is a “world-first”, letting Australian workers apply for a job “quicker than it takes to order a cup of coffee”. The lens promotion is only running today, April 7, but it will be accessible to users via the company’s Snapchat code from tomorrow onwards.

McDonald’s Australia chief operating officer Shaun Ruming said in a statement the new approach stemmed from a desire from users to “interact with the brand on their own terms”.

“For most young people who apply for a role with Macca’s, this is their first entry into the workforce. As such, their personality, positive attitude and enthusiasm are characteristics that are focused on and traits that this tech innovation captures in a simple, yet effective manner,” Ruming said.

“As a business, McDonald’s is constantly evolving its approach to digital technology, for both the customer and employees.”

McDonald’s new approach to recruitment is an attempt by the company to tap into the approximately 3.2 million strong group of 17-34 year old Snapchat users that exist in Australia. 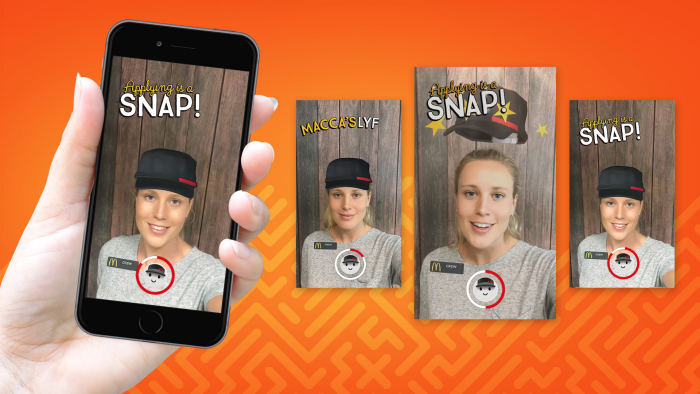 While she praises McDonald’s for “getting creative” with recruitment techniques, director of HR Staff’n’Stuff Deborah Peppard has a number of concerns surrounding applicants submitting a short video when applying for a job.

“As much as anyone tells me otherwise, it will become a judgement based on looks, and with so many of our youths having body [image] issues that’s a problem,” Peppard told SmartCompany.

“Recruitment processes which involves [how] the applicants looks, outside of acting or other similar roles, are unnecessary. We see this across all sectors. The minute someone sends in a photo of themselves, recruiters will use those photos to make a judgement.”

Despite her concerns, Peppard believes McDonald’s approach is “unique and creative”, and shows a true understanding of their employee demographic.

“I love that they’re applying a recruitment technique to meet their demographic and candidates. They’ve got a good understanding of who they want working in their stores,” she says.

“At the same time, it’s sending a message that McDonald’s isn’t as interested in mature age workers.”

Acknowledging many other businesses likely wouldn’t have a similar reach and employee demographic as McDonald’s, Peppard says there’s still chances to get creative when recruiting.

“I think any business can get creative with technology to attract workers to their business, even a business with just five employees can still be creative,” she says.

“However make sure you still have a robust recruitment process in place, as hiring the wrong person be expensive.”

She hopes to see more processes such as the Snaplications, as businesses “have to be recruiting in a more creative way these days”.

“God knows it beats sorting through hundreds of resumes on SEEK,” she says.

Certainly less risky to the McDonalds brand than the relevelation that they are the biggest users of the 457 visa imports program. Because as we know, there isn’t enough demand from local 15-16 yo kids to fill the demand for low cost labour. In fact I think McDonalds should do away with hiring that group and concentrate on importing all its labour supply from the lowest cost countries, in order to increase profits.