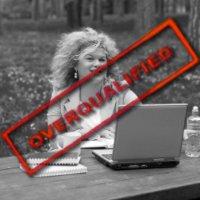 Another is a self-employed electrical engineer currently searching for a job with an established company. He says in his experience most HR professionals, especially those in large businesses, turn their nose up at freelancers and entrepreneurs.

A paper to be presented next month, at the Academy of Management annual conference, though not yet vetted in a peer-reviewed journal, details an experiment conducted in late 2012 by five European academics.