Three-day weekends for all: How COVID-19 has accelerated a fall in average hours worked

One good thing we might get out of this pandemic: a permanent three-day weekend.

Hours worked in Australia have taken a big step down, as the following graph shows. That is unlikely to snap back easily, as the most recent fall in average hours worked simply extends a pattern that has been in place for some time. 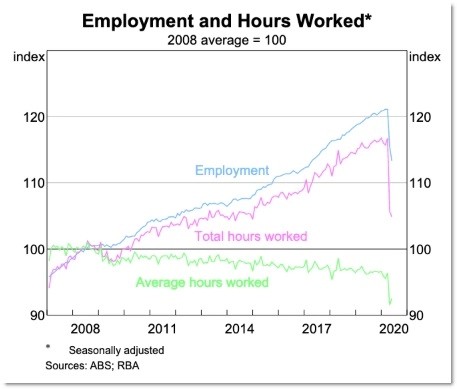 The above graph shows that the fall in work hours has been in place since 2008. I went looking for evidence of what was happening prior to 2008. The Australian Bureau of Statistics (ABS) has data back to 1991, and it shows hours worked were also falling steadily from 1991 to 2008. This is a long-term thing. 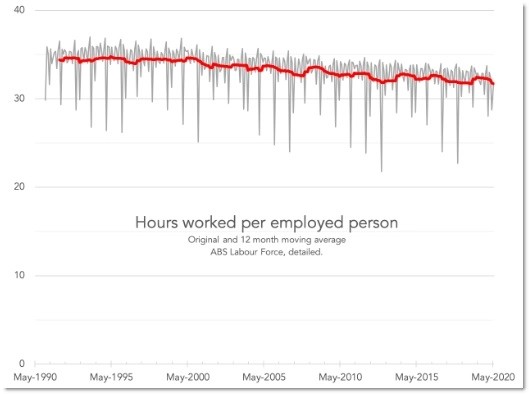 In Australia, the annual average hours worked have fallen from 34.4 to 31.7 since 1991, as the above graph shows. That’s a reduction of 2.7 hours over three decades.

Because the fall in work hours in the pandemic builds on a pre-existing pattern, it is highly unlikely to bounce back. Full-time, five-day-a-week work is likely to eventually become a minority pursuit, and three day weekends could be the norm.

But perceiving five days a week, eight hours a day as the norm? That’s merely a result of our position in history. In the dark satanic mills of the industrial revolution, workers were putting in 60-80 hour weeks. One of the triumphs of economic growth has been to allow us to feed and clothe ourselves with much less work.

As the next chart shows, working hours of full-time workers fell across the developed world last century (and have fallen more since). 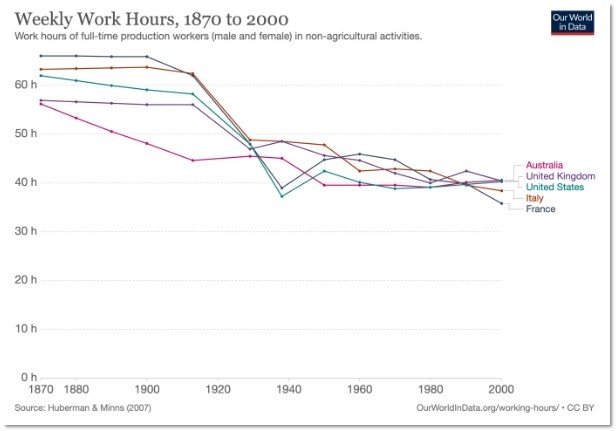 While agriculture might have given us more ability to trade and more chance of surpluses, it came at great cost. We began to work more. The so-called protestant work ethic drew on this agricultural tradition, and back-breaking labour peaked in the industrial revolution when factory owners had great power. It has been ebbing since.

In Australia, the number of people working mega weeks of 70 hours plus has fallen markedly in the last three decades, despite a rapidly growing workforce. We are now working far more sociable hours.

And sociable working hours are getting even more sociable. As the next graph shows, the 35- to 39-hour workweek is now Australia’s most common kind of week. This shows that the fall in average hours worked is not just about the rise of part-time hours. It is also about gentler full-time loads. Meanwhile, even shorter weeks are becoming more mainstream fast. 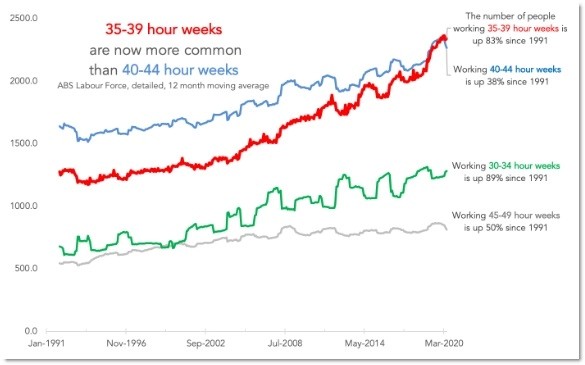 (Unlike the achievement of the 40 hour week by the union movement in 1856, this milestone has passed unremarked.)

Look closely at that formulation. Where’s cooking? Where’s child-minding? What about cleaning?  The men (and boys) who worked 16-hour days in the factories were almost certainly being cared for at home by women.

Part of the reason for shrinking work weeks is that when we count labour hours, we primarily count paid labour. Labour in the home gets short shrift in the statistics.  So when we talk about a four-day week becoming the norm it is important to remember that’s four days of paid work. It doesn’t mean sitting around all weekend without lifting a finger!

France brought in a 35-hour workweek in the year 2000. It remains one of the richest countries in Europe.

The four-day paid workweek that I believe is both inevitable and desirable is made possible by our high productivity. As the next graph shows, richer countries generally work less. This is counter-intuitive but true. 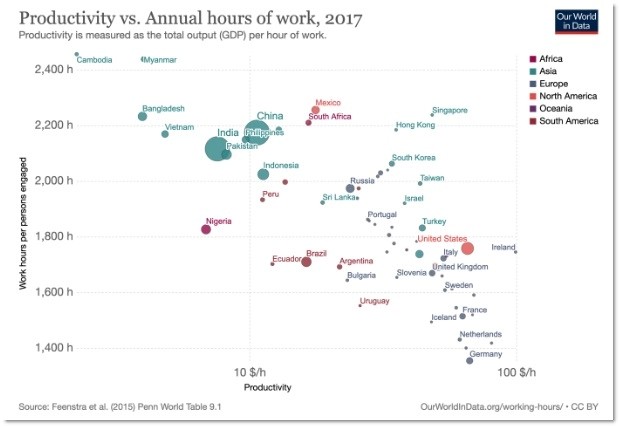 What’s interesting is the dispersion on the right-hand side. When you’re poorer you have no choice but to work hard. As you get richer, you retain the choice to work long hours. Most European countries have chosen not to, and the richer they are (hi Germany) the more they’ve chosen leisure.

The pandemic will speed progress in lots of ways that were already happening, Things like working from home, adoption of new communication tools. Not to mention the transition in global geopolitical dynamics and the demise of public transport.

We can add hours worked to the mix. It won’t be long until, like France, we say au revoir to the traditional working week. Bring on the three-day weekend!

NOW READ: Gelato or no gelato? In a work-from-home world, what are the perks your employees really want?