Seven top businesspeople among those named in Queen’s Birthday honours 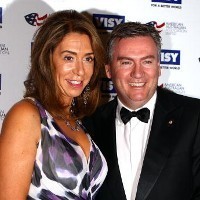 Visy’s Heloise Waislitz, pictured here with Eddie McGuire, has been made a member of the Order of Australia for her philanthropic work.

The Queen’s Birthday long weekend may mean an extra day off work for some of us but it is also an occasion to celebrate more Australians being included in the Order of Australia for their services to the community.

As was the case on Australia Day in January, a number of entrepreneurs and members of successful Australian business families were honoured on the Queen’s Birthday public holiday.

Dick Smith was appointed as a Companion in the Order of Australia for his service to the community through multiple not-for-profit and conservation organisations, as well his support for major fundraising initiatives for humanitarian and social welfare programs and his service to the aviation industry.

But more recently, Smith has been in the news for his political aspirations. In March, Smith registered “The Dick Smith Party” and this morning confirmed he will stand against Prime Minister Tony Abbott in his Sydney seat of Warringah if Abbott does not press ahead with what Smith says are much-needed changes to regulations in the aviation industry.

Geoff Morgan has been made a member of the Order of Australia for his service to the business community, as well as his support for the Scouting Movement, sporting organisations and indigenous education.

One of the three siblings that own packaging giant Visy, Heloise Waislitz has been made a member of the Order of Australia for her philanthropic work.

Waislitz has been chair of Pratt Philanthropy, which includes the Pratt Foundation and Visy Cares, since 1995, when her father, the late Richard Pratt, gave her responsibilities for the Rich List family’s charitable work.

A stalwart of the local and international advertising industry, Tom Dery has been made an officer of the Order of Australia for his service to business and the arts, as well as his work in the not-for-profit sector particularly in the area of cancer research.

Dery is currently worldwide chairman of M&C Saatchi but has a number of successful advertising businesses under his belt. He is the co-founder of creative agencies The Campaign Palace and Whybin Dery & Partners, now part of the Omnicom Group, and was the founding partner in the Asia Pacific region for M&C Saatchi.

Another Rich Lister to be honoured this year is Rupert Myer, who has been made an officer of the Order of Australia. Myer has been recognised for this philanthropic work and his support for the visual and performing arts.

Myer is currently deputy chairman of Myer Holdings, the retail business founded by his grandfather Sidney Myer. He also sits on the board of Amil, Healthscope and eCargo.

William ‘Bill’ Armstrong has been made a member of the Order of Australia for his services to the commercial music recording industry.

Armstrong founded Melbourne’s Armstrong Studios in 1965 and quickly became one of the leading recording studios in Australia. Among the notable artists that have recorded hits at the studio include The Easybeats, The Aztecs, Daddy Cool, John Farnham, Skyhooks and Little River Band.

Armstrong sold the business in the 1990s and is currently managing director of his record label, Bilarm Music.

Retailer Craig Whitworth has been made a member of the Order of Australia for his services to the retail sector and to sailing.

An avid sailor, Whitworth co-founded yacht manufacturing business Miller and Whitworth in 1962. Now known as Whitworth’s Marine and Leisure, the business specialises in marine accessories and operates 16 stores across Australia as well as a mail order business.