Shark Tank recap: How Ashley Newland scored a deal from Janine Allis and Steve Baxter for his portable washing machine 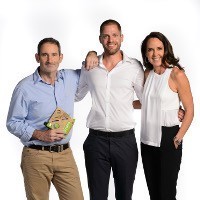 Entrepreneur Ashley Newland was preparing to take a six-week break from his job to travel around Africa and climb Mount Kilimanjaro when he stumbled upon the idea for his Scrubba Washbag.

“I realised I would only be able to pack a couple of changes of casual clothes and that would mean washing clothes every day or two in some pretty remote areas of Africa,” Newland told SmartCompany.

That was five years ago. Last night the solution to Newland’s problem – the Scrubba Washbag – scored him a $240,000 investment from Shark Tank judges Steve Baxter and Janine Allis.

Allis and Baxter teamed up to make the investment, beating Naomi Simson, to each walk away with a 10% stake in the business for a combined $240,000. The investment values the business at $1.2 million.

Newland admits he had some reservations about appearing on Shark Tank – he had previously applied for the US version and was contacted by the local producers instead – and he was initially seeking to sell 8% of the company for $178,000, which would have given the company a valuation of $2.2 million.

But he says Allis and Baxter’s experience growing successful startups and their contact books will help him “ramp up” his business.

Newland, whose background is in the patent industry, says his “light bulb moment” for the Scrubba Washbag came after discussing the product with friends over beers on a Friday night.

“I spent a few weeks thinking about this thing … then I remembered washboards had been around for centuries,” he says. “But they would be too bulky for travel and you still needed a sink.”

That was when Newland developed a flexible internal washbag that sits inside the Scrubba Washbag’s waterproof bag. The washbag weighs less than 145 grams and only require a small amount of water and no electricity to work.

Newland says it took “quite a while” to come up with the prototype for the bag and he would spend his evenings after work filling out patent applications.

A year-and-a-half after his trip to Africa, Newland was on the licensing track, pitching the products to companies in Australia and Switzerland. But deals were never signed as the washbag had yet to be tested in the market.

“I realised I needed to prove it in the market myself,” he says.

“So I quit my job and turned to crowdfunding. It’s gone from strength to strength since and I haven’t looked back.”

Scrubba Washbags have been sold via crowdfunding since June 2012, growing by between 200-300% since that time. Newland says the business was profitable since the end of its first year of sales and revenue is currently around the $1 million mark.

Newland describes pitching to the sharks as “exhilarating” although he admits his biggest fear was that he would be too nervous. But plenty of time spent honing his pitch with friends and families settled those nerves.

“The sharks are actually really down to earth and supportive,” he says.

“What Shark Tank has done is give me access to Steve and Janine who both have incredible experience with creating successful startups and growing companies.”

Before Shark Tank, Newland thought Scrubba Washbag may become an acquisition target for a larger company and so had held off on hiring staff, not wanting to have to let employees go if he received an offer for his company.

“Now I’m going to postpose becoming an acquisition target and really look at driving the business,” he says.

“I’ll be renting a commercial premises soon and employing quite a few staff.”

Newland’s advice to other budding entrepreneurs is to always “back yourself”.

“You do have to have a good idea that is valid but there are a lot of naysayers out there who don’t have the same entrepreneurial spirit that [the sharks] do.”

“Take it all on board but be willing to discount other people’s views if you need to.”