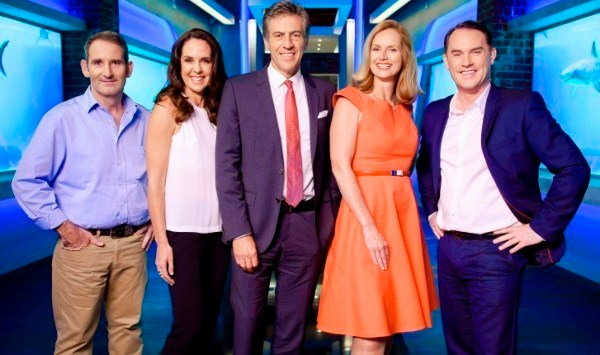 I’m not sure what I expected from Shark Tank, the show for entrepreneurs which debuted last week on Channel Ten, but watching Red Balloon founder Naomi Simson eat dog food on television was not on my list.

Week two can be marked as the week the Shark Tank judges showed they really will do anything to fully investigate a product.

After all, Simson was just following up with the dog food after an entrée of edible bug flour.

The founder of Edible Bug Shop, Skye Blackburn, pitched the judges for $170,000 in return for 20% equity in her business which breeds edible insects.

But her valuation of her business at $850,000 meant the sharks weren’t keen to bite.

Boost Juice founder Janine Allis was the only judge to make an offer with a bid of $170,000 for half the business on the basis she needed to be an equal partner.

Will we be seeing edible bug flour in Boost Juice smoothies soon?

The penchant of Shark Tank producers for shall we say, more “unusual” products, showed in the next business – a commercial drone manufacturer Lambdatron.

Founder James Palmer wanted $150,000 for a 10% stake in his company but being a bit fluffy on the numbers cost Palmer, with the sharks rejecting him and leaving him hanging out to dry.

Jennifer Holland pitched the sharks her illuminated tongue depressant device asking for $76,000 in a deal for 10% equity.

Holland said Throatscope cost $3.39 to make but believes it can be sold for $29.99 in pharmacies.

There was a bit of confusion as to whether Steve Baxter was the startup guy or the standup guy.

Let’s just say the audience was not confused; he’s not that funny.

But startup or standup, Baxter was not impressed by Holland’s background as an accountant (at least she knew her figures!) saying he preferred to invest in people with strong technical backgrounds.

But Baxter said he’d be willing to waive that this time as the product is not highly technical.

What Holland has, according to Baxter, is a “lightsaber” for the tongue.

Reasoning kids will be all over it, Baxter offered $76,000 for a 30% stake as well as a 5% royalty of sales up to the investment amount.

Then we came to Simson’s dog food dinner.

Teo brought in her dogs Poko and Gigi in a double bugaboo pram.  “Dogs are the children of tomorrow,” she said.

The premium dog chow entrepreneur revealed she’s already invested a lazy half a million of her own money in the business (with a good percentage of that going on her expensive choice of dog pram).

But her confused description of what constituted turnover and profit meant all the judges were out.

“You don’t know your business proposition as well as you should,” John McGrath said.

Even Simson, who had just finished digesting the edible dog food, had no interest.

The last contestants were Bruno and Paul, who created a conveyer belt tray for utes.

Bruno and Paul’s nerves soon turn to confidence after the device actually works on its TV test run.

But the fact the loading and unloading device was still in a prototype phase put the Sharks off.

Bruno and Paul also failed to win Simson and Allis over by describing the ute tray as so simple even a female could use it.

But McGrath was impressed by the product and said while he wouldn’t invest he’d set up a meeting with contacts of his at Toyota.

Meanwhile, in a corner of the set, Simson was quietly spitting her dog food into a tissue.