Why this social enterprise is letting its workers nominate their pay

A social enterprise startup has taken pay transparency to the next level by allowing its workers to nominate what their salary should be—and letting everyone in the business know what each other is paid.

AbilityMate is a purpose-driven social enterprise that began 18 months ago, creating customised assistive devices for and with people with disabilities. Currently, the startup is developing ankle and foot orthotics and is researching how to begin 3D printing the devices.

Co-founder Melissa Fuller told SmartCompany the decision to provide pay transparency stemmed from her previous experiences in larger organisations where there was “a lot of secrecy” around wages.

In one instance, Fuller recalls how a female colleague “went on a mission to seek out what her colleague with the same job description was being paid” and after finding out this person was paid more than her, decided to share the information with others. The incident caused “major disturbances” within the company, says Fuller, and resulted in this woman breaching the “gag clause” in the company’s employment contracts, and ultimately losing her job.

“She went about it in an indirect way, never spoke to her manager or executives first,” Fuller says.

The experience has stayed with Fuller and she says when establishing AbilityMate, the goal was to “avoid inequality within our organisation”.

“Because we are purpose-driven, we didn’t want anything that could get in the way of our ambitions,” Fuller says.

“I think it’s better if it’s out there in the open.”

Fuller’s enterprise has six employees alongside three interns, and all workers are either contracted or employed. Roles vary from communications and marketing to production and fabrication.

Fuller says AbilityMate has a “small and nimble team” and in true startup fashion, each employee has a part time job outside of the business as well. The employees are paid pro rata for the days of the week they work. 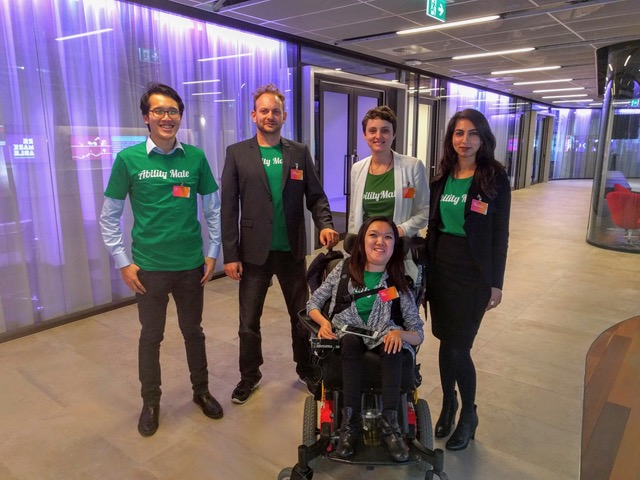 Fuller and her co-founder Yohan du Plessis first had a discussion about their own pay levels before approaching each of the employees. But the process involves more than just a conversation with the two founders, as the employees are required to seek advice from an expert, along with their co-workers, about what an appropriate salary would be.

“We asked each of them what they think they should be paid and told them to go off and have a think about it. They’re also required to get advice from a relevant expert in the field,” Fuller says.

“Then they talk to the team about what they think about the suggested amount.”

Fuller says the process went smoothly and there was no “back and forth” with employees. While some people may expect employees would suggest an exorbitant amount given the chance, Fuller says they experienced the opposite.

“One of our workers … actually went in quite low and significantly devalued herself,” Fuller says.

“Both the team and the expert suggested reconsidering the amount, as we thought she’d feel undervalued.

“I was surprised to get a lower than expected offer, we really didn’t think that would happen.”

Fuller says that after having the initial conversation with the employees, none of them felt they had to come in with a high offer, saying each came in at an “honest level”.

“They didn’t want to come in with a really high suggestion, as the whole team knows how much each of them is being paid,” she says.

“If you’re being paid $200,000 a year, then there’s a huge expectation on the amount and quality of your work, and the whole company knows it.”

Suited to SMEs and startups

Fuller admits as the company grows the founders will have to put in new processes to prevent overly high estimations. The company is hoping to scale up the system as they grow, perhaps with the help of a mobile application.

“Currently everyone’s pay is on a spreadsheet,” she says.

Fuller recommends other smaller businesses and organisations adopt total pay transparency, particularly if they are not-for-profit and purpose-driven startups.

“I would recommend it to any business that’s starting up, or smaller teams within larger organisations. It’s so helpful for purpose-driven startups, as you want to remove any barriers for individuals creating change,” Fuller says.

“It’s been a great experience so far, and a positive democratic process.”

But Fuller does recognise the system would not work for all businesses.

“It’s not going to work for everyone, it’d be really hard for a big corporate company, it would turn into World War III,” she says.

This is wonderful that people are actually doing it. Check out Ricardo Semler from Semco – who has been doing this and more to empower workers since 2005 – https://youtu.be/gG3HPX0D2mU. Needs to now spread and reach tipping point so it becomes the norm. It very much fits in with the principles of holocracy – where people are responsible to themselves and their immediate ‘circles’.