Stuck in meetings but 70% think they are a waste of time: Survey 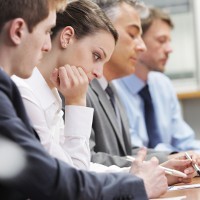 Australian workers are spending more time in meetings than ever before but close to 70% of these workers think meetings are a waste of time.

A survey of more than 1100 employees, conducted by Ovum on behalf of LogMeIn in October, found approximately 88% of Australian and New Zealand employees believe the number of meetings they are required to attend is either rising or staying the same each year, while 30% report the number of ad hoc or unscheduled meetings has jumped in the past 24 months.

But 66% of the employees said more than half of the meetings they are required to attend are of no value.

The survey found this perception is primarily influenced by late start times for meetings, with late meetings estimated to cost executives three hours a week or five working days a year in lost time and productivity.

Martin Nally, managing director of HR Anywhere, says there are multiple reasons why meetings can cause frustration in the workplace.

“If regular meetings are scheduled and then they don’t occur, that can lead to massive frustration,” Nally told SmartCompany.

“But if meetings are scheduled too frequently, it can have the same effect.”

For Nally, effective meetings are purposeful – “if they achieve their purpose they can done and dusted in five minutes” – and have structure.

“You must have discipline about the structure of the meeting,” says Nally, who says for board meetings that require significant preparation, it’s particularly important to be able to distinguish between material that is just for information and decisions which need to be made within that meeting.

It’s also important to create a “no zinger zone” in meetings, says Nally. This involves not surprising employees with a particular topic and giving them warning if there is a particular issue or project you plan to raise in a team meeting.

Nally says there is “no cookie cutter” approach that will work for all businesses and determining what type of meetings will work within a company’s culture will be a process of trial and error.

“It’s all about the value of respect and the value of care,” he says. “Care for your employees and colleagues that you’ll run purposeful meetings that have an outcome and give people a voice.”