A Sydney Water worker says she was not shown the final version a workplace safety campaign she had agreed to be involved with, and was humiliated to discover a poster about spine safety was distributed across the workplace carrying her picture and the slogan, “Feel Great – lubricate!”

Yelda, who has worked for Sydney Water for more than a decade, says she was turned into “the punchline for a dirty joke” in the final version of a poster for the ‘SafeSpine’ campaign, which included a large slogan above an image of her with her arm in the air, which read “Feel great – lubricate!” 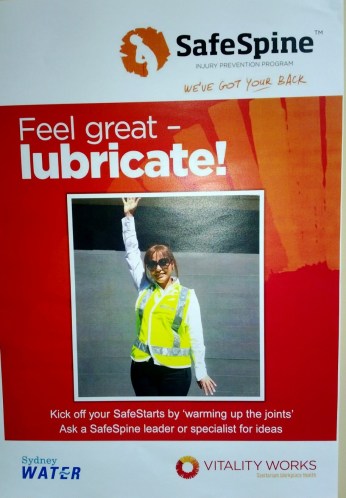 “Kick off your SafeStarts by warming up the joints,” the poster advises.

Slater and Gordon are representing Yelda in the complaint and principal Aron Neilson said in a statement his client took part in the project with good intentions, but was humiliated.

“She trusted this would be respectfully handled, but instead, she became the laughing stock of her workplace,” he said.

A spokesperson for Sydney Water has confirmed to SmartCompany that while the Anti-Discrimination Board has asked both parties to keep the details of the complaint confidential, Sydney Water believes “that the poster was not conduct of a sexual nature, but a work, health and safety campaign”.

Vitality Works, which operates the SafeSpine project and worked with Sydney Water on the poster design, confirmed to SmartCompany this morning that the poster is just one part of a broader campaign on spinal health. The company declined to give further comment on the sex discrimination claim, citing the board’s request for confidentiality.

Get final approval from staff for campaigns

Jess van der Walt, talent leader at Employsure, says given that marketing campaigns can evolve so quickly, it’s important for employers to keep any employees who might be involved in promotions in the loop about how things are changing.

“It’s very much about explaining and making clear what the end product will be,” van der Walt says.

There are basic brief points that businesses can follow, including keeping staff updated on “imagery, wording, slogans and the certain channels in which it [the material] going to be pushed out on,” van der Wilt says.

Advertising expert and senior lecturer at the University of Melbourne, Dr Lauren Rosewarne, says there’s temptation for companies to get provocative with their communications, but cases like this one suggest care should be taken.

“As both a writer and a reader, we want words to jump off the page: to be evocative and, particularly in the context of advertising, to get attention,” she says.

“‘Lubricate’ works this way. The word, however, also has connotations that we associate with sex, which means a slogan that might work effectively in a text-only poster, takes on different connotations when it is coupled with an employee photo.”

Rosewarne says that regardless of intentions, this case illustrates how a word that otherwise might be okay to use to advertise spine health can potentially cause concern within an employment environment by becoming “personalised and sexualised”.

For businesses looking to run their own internal marketing, Rosewarne emphasises the importance of employees seeing the final versions of any material they are featured in.

“This serves as a reminder to anyone agreeing to be involved in such messaging that it is essential to retain final approval of use of your image to avoid situations like this,” she says.

You can say anything without someone taking it the wrong way…has this country lost it sense of hummer. I wonder if anything would have been said if it was a male in the picture>

I’ll see you in court.

Slater & Gordon are onto it. Say no more.

Slater & Gordon are onto it. Say no more.

Seriously the people who find this funny dont have a sense of humour! I can only imagine the smutty crap her male co-workers subjected her too they should all be sacked!