Thankyou Group’s Daniel Flynn wins emerging entrepreneur award: “I was just a kid who got an idea” 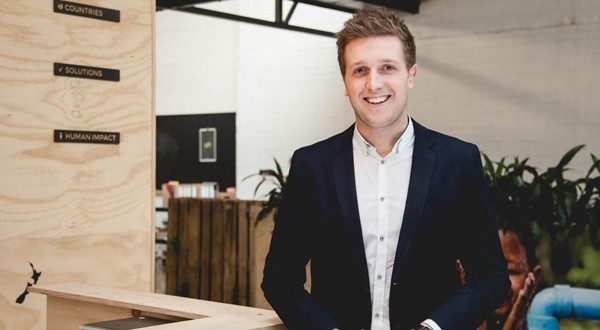 Responding swiftly to the needs of your customers goes a long way, according to Thankyou Group founder Daniel Flynn.

Flynn described what it felt like getting his first order for Thankyou’s water bottles at the 2015 Ernst & Young Southern Region Entrepreneur Of The Year Awards ceremony in Melbourne on Thursday night.

Flynn, last year’s Young Victorian of the Year, took out the night’s top gong, EY’s Emerging Entrepreneur of the Year Award for his social enterprise, which helps fund projects in developing countries from the sales of water, hand products and food products in Australia.

On accepting his award, Flynn told the audience the Thankyou’s first water order was for 50,000 units.

“The director of the company said how quickly can you get it to us, and we said three weeks,” Flynn said.

The response was delight at how quickly the order would be received, Flynn says.

“And we said, yeah, we’re pretty quick at Thankyou Water.”

This year is the 15th anniversary of the EY awards, which aims to celebrate entrepreneurial drive, creativity, innovation and to inspire the broader business community.

The winners, as well as the social entrepreneur and listed award category recipients, will go on to represent the state at the national awards in October, where they will compete for the title of 2015 Australian EY Entrepreneur Of The Year.

Flynn told SmartCompany it is a “huge honour” to have come this far, while saying awards were a bonus rather than the goal and awards nights “a great chance to meet good people”.

“We didn’t set out to do this to win awards, it’s incredibly humbling,” he says.

“There’s so many inspiring people in the room.

“I probably never thought I’d be in anything like this.”

Flynn says awards are another opportunity to share Thankyou’s message.

“I was just a kid who got an idea, got a great team and made it happen, and anyone can,” he says.

Cyan told the audience the idea for Envato, which bills itself as an ecosystem of creative websites, came about one day when the pair was “at the swimming pool” thinking about the idea of business and travel.

Collis says one of the online business’s success stories was a novel one. One seller who created a website through the site is made up of one person from Pakistan and one from Florida. The two have never met but have made millions together.

“They connected on the site… they’ve made six or seven million together but still to this day have never met,” Collis said.

Also recognised in the non-competitive regional award categories were Andrew Sudholz, of Japara Healthcare Limited in the listed award category, Ian Carson of SecondBite in the social entrepreneur category and PDF Food Service’s Richard Smith, who was awarded the lifetime achievement Champion of Entrepreneurship award.

“Victoria has a strong history of entrepreneurs who look for a better way of doing things,” he said.

“They take calculated risks and identify opportunities where others only see obstacles. Our 2015 award winners are excellent examples of that.”

*SmartCompany attended the awards as a guest of EY