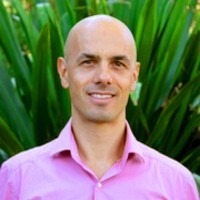 It’s no surprise that being hunched over at a desk all day is bad for your health, but replacing one hour of sitting a day with standing can reduce the risk of a person’s mortality by 5%, according to recent research.

The findings, by Professor Emmanuel Stamatakis from the University of Sydney’s Charles Perkins Centre, will be presented today at the Be Active 2014 conference in Canberra – part of a series of presentations on physical activity and health.

Professor Stamatakis said in a statement replacing sitting with walking or other moderate vigorous physical activity can result in a much larger reduction in mortality risk – up to 12% to 14%. He urged office workers to reduce the time they spend sitting at their desks.

“It’s absolutely imperative to find ways to incorporate some sort of movement into the daily office routine, even if only of a light intensity,” he said.

“I believe in 20 to 30 years we will look back and be horrified that we imposed so many hours of sitting on our workers, just so that they can make a living.”

The physical health and wellbeing of workers has been a significant issue for businesses in recent years, with some companies implementing a range of measures to combat obesity and heart disease. Healthy initiatives are not only restricted to the bigger players, with one Tasmanian construction company giving its employees free health checks and encouraging them to exercise and eat fruit and vegetables.

“There are plenty of things you can do. If you look to countries such as those in Scandinavia, the availability of things like adjustable workstations there presents a choice, and cuts down on these sorts of injuries.”

Stand up at meetings

Standing up at meetings not only has the benefit of keeping everyone active, but research shows people who stand up at meetings tend to get their work done faster.

“The default position is to sit around a table and chat for two hours, but employees need the confidence to move around,” Dunstan says.

Talk to colleagues instead of emailing

Working in the digital age has created a habit where people will email others standing just a few feet away. Dunstan says you can get rid of that by walking over to their desk and having a chat.

“It’s the same as going to the water cooler, or whatever. Going over and talking to people instead of emailing can have a good effect.”

Stand up every half hour

Sitting down for hours can cause serious injury in some cases. Dunstan says standing up every half hour can reduce the negative effects.

“It doesn’t need to be vigorous, but standing up every half hour can have some great benefits.”