The one word that will encourage your team to work harder 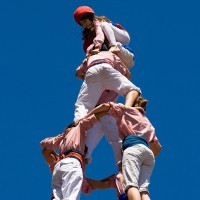 The benefits of working in teams are well documented but research from Stanford University has revealed simply using the word ‘together’ when giving instructions to employees can have a powerful effect even when the employee is working on their own task.

In a study published in the US Journal of Experimental Social Psychology in July, Stanford University researchers Priyanka Carr and Gregory Walton conducted five experiments to measure how individuals respond when told they are working with others.

The experiments were conducted under several different conditions, with some people told they were working “together” with other people to solve a puzzle, while others were led to believe they were working on the puzzle but separately to others.

In all scenarios, the problem-solving task was the same and the individual completed the work in separate rooms.

The results overwhelmingly showed giving individuals cues they are working with others increases their level of intrinsic motivation.

The same group were found to be more engrossed in the task, performed better in completing the task and showed less signs of fatigue when having to persist on the task.

They also chose to do 53% more related tasks in a separate setting two weeks later when they were encouraged to reflect on how their interest in the task was relevant to their personal values.

“Our research found that social cues that conveyed simply that other people treat you as though you are working together on a task – rather than that you are just working on the same task but separately – can have striking effects on motivation,” said Walton in commentary about the results.

“Simply feeling like you’re part of a team of people working on a task makes people more motivated as they take on challenges.”

And Carr noted in the same article that creating a sense of togetherness does not have to be an expensive exercise.

“It does not take enormous effort and change to create this feeling of togetherness. Subtle cues that signal people are part of a team or larger effort ignited motivation and effort. Careful attention to the social context as people work and learn can help us unleash motivation,” Carr said.

“Human beings are social animals that like to work well,” says Ash.

“Studies that show best practice in companies usually find people who can develop friendships and relationships are far more satisfied in their jobs and more productive.”

Ash says you only need to look at the benefits achieved by companies with open plan offices to see that individuals are more productive when they are working close to others.

“The advantage of that is they are sounding out ideas and coming together,” she says. “They are able to innovate and continually improve.”

Creating a company vision or mission and inviting employees to work towards that goal can also be a way of letting employees know they are working together, says Ash.

“One major company, one of their four company values is teamwork and employees’ performance is assessed on that, 50% of their performance assessment is tied to the company’s values.”

But Ash says the benefits are not just available to large organisations with big teams.

“Individual entrepreneurs and business owners can go and find people with similar situations and share their problems,” Ash says.

“If you can create an informal team with individuals, that can be a good thing too.”