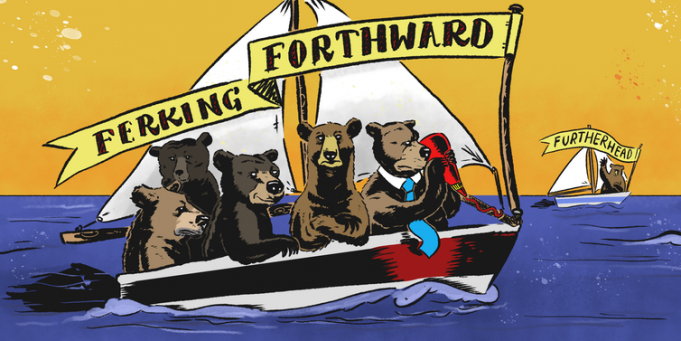 The piece around workplace jargon is moving forward, with the team hitting the ground running. We’ve got our ducks in a row, have drilled down into our learnings — let’s run it up the flagpole and see the result.

Clearly we need to enter 2018 with a fresh set of expressions for the workplace.

Now, I could suggest some spanking-new ones, but lexical novelty comes with risks — besides, we’re all a bit weary of innovation in the workplace.

So in the spirit of recycling, I suggest we recruit golden oldies to inject energy into modern managerial jargon, some linguistic gems from the past that deserve a second go.

Reaching out with saucy oars

Linguistic bugbears are always in the eye of beholder, but singing from the same hymn sheet seems to get up most noses. Old nautical jargon might be just what’s needed here, specifically — in the quill or jumping in quill. These are expressions that also meant “working in harmony”.

The quill here isn’t a feather, but an early version of coil (of rope). If you’re all jumping in quill, you’re nicely coiled up in concentric rings, so no need for synergizing either.

The world of business has also given us out over one’s skis. The message is “don’t get too far ahead of yourself”. Skiers I gather are irritated by this one because they feel the imagery is wrong, and those of us who aren’t into winter sports are simply confused.

If the idea is acting prematurely or recklessly, can I suggest we resurrect another couple of nautical expressions? Ships or boats that were rashly venturing were once said to be with saucy rigging or with saucy oars — titillating images for a change:

“They might have been sailing with saucy rigging with that restructure.”

Being loaded for bears when you hit the floor running

Something that makes regular appearances in our workplace memos is getting your ducks in a row, in other words, being organised. Its origin isn’t clear — ceramic flying ducks on a wall, rows of mechanical ducks at the fairground, balls (sitting ducks) lined up to be potted on the pool table.

It could also relate to real live ducks close together and about to be shot, or even the mother duck with her brood. All were possible inspirations.

But I suspect we need a stronger image for the modern corporate world. So how about being loaded for bear(s), a North American expression from the 19th century that also meant being fully prepared? Here you have to imagine hunters geared up for an bear encounter.

If you’re loaded for bears before the next meeting, you’re ready for anything.

Ideating or bethinking outside the box

The message from many management gurus is that plain and simple English words are what we need to achieve clear communication, and in the interests of de-jargonising modern corporate-speak we could even revive a few.

Sibsomeness, somredness, onehead, onehood all once referred to different aspects of unity of spirit, mind and action. While they lack the profitable association of corporate synergy, that meaning can be supplied:

“The team work resulted in a sibsomeness that was very productive.”

We like to investigate matters meticulously but are thoroughly sick of drilling down or peeling the onion. Now, we could bring back bolting the flour with its different image of a bolting-cloth or sieve. But why not Old English through-seek, with more or less the same meaning and a one thousand year-old pedigree.

The English word furtherhead was overwhelmed by French-inspired priorities and prioritize, and never took off. But as something that can be both noun and verb, it’s a handy replacement for these two foreign-derived expressions:

“The department has failed to futherhead safety within the industry.”

Let me finish with going forward, a kind of sentence tag that I equate with the teaspoonful of sugar following the tablespoonful of cod liver oil:

“This is our strategy going forward.”

There’s a fine Old English expression that could replace this overworked corporate morale booster — ferking forthward meaning moving forward, or helping something on its way.

In the modern version of the verb, prepositions are flexible. And whether it’s ferking out, up, off or forward, throughout its long and complicated life this verb has always had direction, action and bucket loads of purpose at its core:

“This ongoing restructuring of the business is a necessary step in creating a leaner organisation ferking up.”

There’s a little extra something here, too. It comes from the subtle vowel change that during the 16th century transformed ancient ferk to the modern-day F-word (undoubtedly this transition was assisted by other sources — successful expressions are usually mongrels).

Now, I know it’s easy to tilt at the jargon of others. But when expressions start doing something to people’s neck hairs, it’s time to let them go.