Pursuing happiness can be an obsession, but is there more to life? 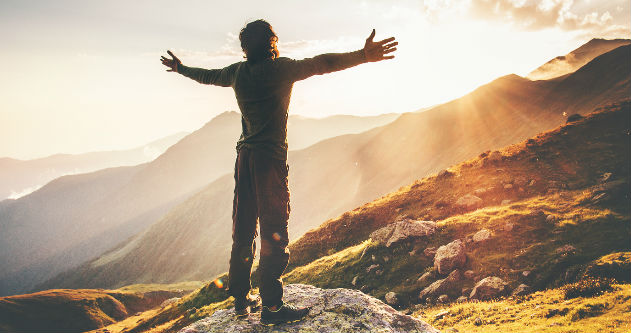 What is the true path to happiness? It is a question that has evolved into a cultural obsession, and there are, of course, many answers.

But are we looking at it the wrong way? Is there more to life than being happy?

This a question writer Emily Esfahani Smith tackles in a TED talk in which she recounted her own experiences examining what lies beneath the pursuit of happiness.

“I used to think the whole purpose of life was pursuing happiness,” Smith said.

“Everyone said the path to happiness was success, so I searched for that ideal job, that perfect boyfriend, that beautiful apartment.

“But instead of ever feeling fulfilled, I felt anxious and adrift. And I wasn’t alone; my friends – they struggled with this, too.”

Chasing happiness can be counterproductive

Smith’s interest in the subject saw her embark on academic study to learn what makes people happy, and what she discovered changed her life.

“The data showed that chasing happiness can make people unhappy,” she said.

“And what really struck me was this: the suicide rate has been rising around the world, and it recently reached a 30-year high in America.

“Even though life is getting objectively better by nearly every conceivable standard, more people feel hopeless, depressed and alone. There’s an emptiness gnawing away at people, and you don’t have to be clinically depressed to feel it.”

Assessing if this is all there really is, Smith noted that research points not to a lack of happiness, but rather a lack of meaning in life.

Should meaning be the goal?

Smith pointed to this concept and raised more questions, such as what the difference between being happy and having meaning in life is.

Meaning, she said, is deeper than happiness.

“Our culture is obsessed with happiness, but I came to see that seeking meaning is the more fulfilling path,” Smith explained.

“And the studies show that people who have meaning in life, they’re more resilient, they do better in school and at work, and they even live longer.”

Asking how we can live more meaningfully saw Smith delving deep into research and interviewing hundreds of people over a five-year period.

“Bringing it all together, I found that there are what I call four pillars of a meaningful life,” she states. “And we can each create lives of meaning by building some or all of these pillars in our lives.”

Belonging is the first pillar, which comes from being in relationships in which you are intrinsically valued for who you are and in which you value others as well, with true belonging springing from love.

“For many people, belonging is the most essential source of meaning, those bonds to family and friends,” Smith said.

“The key to purpose is using your strengths to serve others,” Smith stated.

“Of course, for many of us that happens through work. That’s how we contribute and feel needed.

“But that also means that issues like disengagement at work, unemployment, low labour force participation – these aren’t just economic problems, they’re existential ones, too. Without something worthwhile to do, people flounder.”

Meaning is the third pillar, relating to transcendence, which is experienced at an individual level in response to different stimuli.

“Transcendent states are those rare moments when you’re lifted above the hustle and bustle of daily life, your sense of self fades away, and you feel connected to a higher reality,” Smith said.

Storytelling is Smith’s fourth pillar, which she acknowledges can surprise some people. This is “the story you tell yourself about yourself”.

“Creating a narrative from the events of your life brings clarity,” she said.

“It helps you understand how you became you.

“But we don’t always realise that we’re the authors of our stories and can change the way we’re telling them. Your life isn’t just a list of events. You can edit, interpret and retell your story, even as you’re constrained by the facts.”

Smith states that the pillars need to be built “within our families and our institutions to help people become their best selves”, while noting that, with the process ongoing, “living a meaningful life takes work”.

Smith says “Transcendent states are those rare moments when you’re lifted above the hustle and bustle of daily life, your sense of self fades away, and you feel connected to a higher reality”.

In other words, having a strong faith in a real and living God.