Where are the germs hiding in your workplace? The five worst offenders 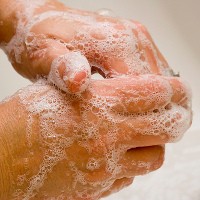 Australian office workers are taking almost two days in sick leave each year because of dirty phones, computer keyboards and bathroom door handles, according to research into office hygiene released this week.

Commissioned by hygiene specialist Initial Hygiene, and conducted by the Centre for Economics and Business Research, the research found unhygienic workplaces are costing Australian businesses $5.4 billion a year in lost earnings, with workers taking an average of 1.6 days off a year because of sub-standard hygiene.

The research also found office employees spend an average of 2.2 days avoiding unhygienic spots in their workplace, spending time queuing for the cleanest toilet cubicle instead of getting their work done, costing their employers an estimated $6 billion a year.

Australian workers are also willing to part with some of their own cash in exchange for cleaner workplaces. The research found employees would be willing to pay an average of $240 a year if it meant they could avoid health hazards in the workplace.

Initial Hygiene marketing manager Natalie Howard told SmartCompany is essential for businesses of all sizes to have a solution for workplace hygiene, but small businesses could be hit harder financially by unclean workplaces.

“Small business are obviously always looking at ways to save money, but if you have a small team and five members of that team have to go home sick, that’s a lot off your bottom line,” says Howard.

“Scrimping and saving in the end could cost you more money,” she says.

When it comes to office hygiene, here are the five hotspots for germs and bacteria.

According to Howard, office bathrooms are the number one danger zone when it comes to germs and bacteria that can make your staff sick.

Howard says the number one concern in office bathrooms is the feminine hygiene unit, follow by door handles.

“One in four people don’t wash their hands after using the toilet at work, which is really quite disgusting,” says Howard, who says many male employees don’t necessarily think they need to wash their hands each time they take a toilet break.

“Small businesses usually have just one unisex toilet and when you have more people using the one toilet, you really need to have a solution for keeping that area clean,” says Howard.

According to Initial, the spread of bacteria from the office bathroom can be reduced by up to 80% by simply washing and drying hands after using the loo.

Your phone is the most contaminated object on your desk with Initial Hygiene claiming it attracts 25,127 microbes per square inch.

“When you think about it, people are not washing their hands after using the toilet and then picking up the phone,” says Howard. “One in five people also use their mobile phones while in the toilet cubicle.”

Howard says sharing phones with others, as well as using office phones while you’re sick can also make the telephone a health hazard.

Office desks have 400 times more bacteria than a typical toilet seat, according to Initial Hygiene, and the desks of male workers are apparently even worse.

Your computer keyboard is prime real estate for nasty germs. Howards says many workers eat lunch at their desks, leaving traces of food behind, while sneezing and coughing also add germs to the mix.

Cleanliness in the office kitchen again comes down to the fact that many workers don’t wash their hands, says Howard.

“People are opening the cutlery draw, pulling out cutlery, turning on the tap, and opening cupboards,” says Howard. “This is why we always recommend using hand sanitisers in the kitchen.”

Finally, Howard says the reception area can be another space where businesses come undone in the hygiene stakes.

The reception is the place where most workers and visitors will walk through at some point in the day, and therefore carry with them any colds and flus they might be harbouring. All these hands touching the same doors can cause a health hazard, as can shared visitors’ pens and sign-in books.