Why this chief executive pretended to be a man on LinkedIn

The chief executive of the China Australia Millennial Project who changed her name from ‘Andrea’ to ‘Andrew’ on LinkedIn says there are plenty of opportunities for the professional development platform to install new features like warnings to users who behave badly on the platform.

In a post on Mumbrella this week, Andrea Myles recounts how she changed her identity on the networking platform and added a stock image of a male chief executive as her profile picture. She wanted to conduct a “social experiment” after being “pissed” at the number of inappropriate communications she had received through LinkedIn direct messages. 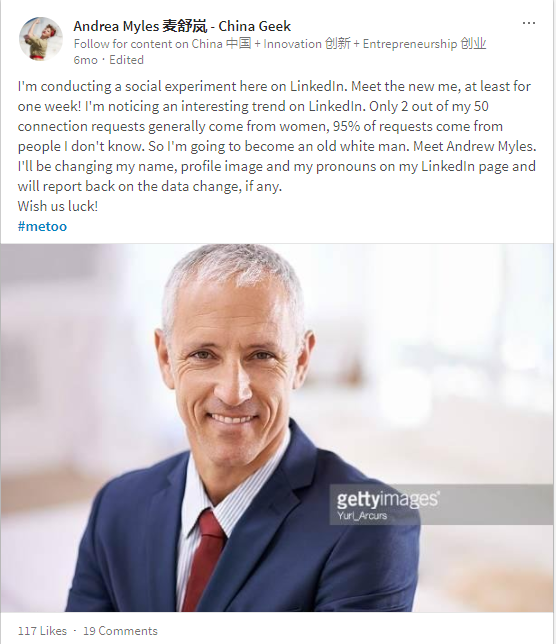 “That’s where 99% of the sexual harassment on LinkedIn I’ve experienced takes place. In the corners where no one else can see, where the guy’s boss and colleagues can’t view their comments,” she explained.

Switching her identity to a male chief executive stopped inappropriate inbox messages from men on the platform, while also reducing the number of people re-explaining content to her when she posted it on the platform.

As ‘Andrew’, Myles said “I noticed things were just a little bit easier”. This included less online flirtations being sent her way, as well as being challenged less often when Myles shared information on topics like China and innovation.

Speaking to SmartCompany this morning, Myles says she believes “there’s heaps more” the platform could be doing to create a better environment for all business people on the platform.

“I can guarantee you that if LinkedIn had a functionality where somebody who was blocked, say, even three times, be booted off the platform, then behaviour would clear up very, very quickly,” she says.

She believes the platform could be improved for women entrepreneurs, because they are more reluctant to reach out to connections in case these are misinterpreted as more than just wanting to connect with other professionals.

“When it comes to the entrepreneurial side, I do think women are more reluctant [than men] in who they reach out to.”

Myles says her decision to become ‘Andrew’ on the platform was “a really simple version of disrupting the platform”.

“By just changing one letter in my name, I changed the focus. I’d like to see more people playing around with that sort of thing.”

LinkedIn has worked hard to create useful tools like video, Myles says, which she believes has been heavily taken up by women entrepreneurs.

However, she’d love to see more done to make it clear to users that inappropriate communications on the platform come at a cost.

“If for example LinkedIn actually told the head of company HR, ‘you’ve got someone [working for you] who has been blocked on LinkedIn six times’, that person just wouldn’t try it on,” she says.

“Our User Agreement states clearly that our members should act in a professional manner, and we encourage members to report any behaviour they consider to be inappropriate,” the spokesperson said.

“The online world has no shortage of places for people looking for dates; it’s neither common, nor effective, to do that on LinkedIn. And if someone insists on trying, we have tools in place to block those people ​– and where necessary, remove them from the site altogether.”

Got a story to share about your experience on LinkedIn? Email news@smartcompany.com.au and let us know.

Reason’s why I hate using LinkedIn not to mention I don’t have the time to read all posts and see what everyone else is doing, …Seriously, does everyone know all their 500+ connections really well? cause I don’t. LinkedIn is only useful and should be used strictly for business purposes and contacts, not just for the sake of connecting, (Look how many connections I have therefore I’m important now) Pfft please… Half the time they treat all these platforms like a meat market and don’t know most from a bar of soap!! Some just want to snoop in your work life, they should get a life instead of ghosting around with private account’s checking your profile out….