Kim-cheep: Korean restaurant owner claims he paid workers $12 an hour because he feared retribution from rivals 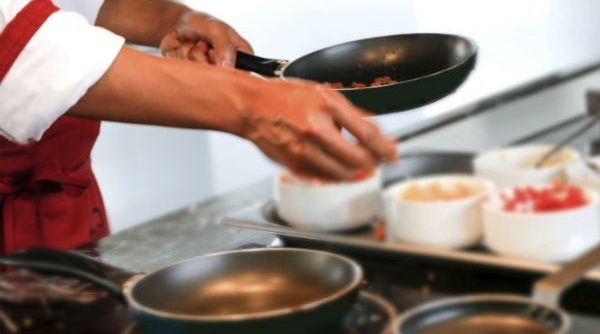 A Korean restaurant in New South Wales says it advertised for staff for as little as $12 an hour because it was afraid of the potential backlash from competitors if it were to pay them the award rate.

678 Korean BBQ in Pitt Street, Sydney, will back-pay two former employees $1300 in penalty rates after an investigation by the employer watchdog.

The two employees, who spoke little English and were in Australia on 417 working holiday visas, were also allegedly paid a flat rate of between $11 and $13.

When this claim was brought to the attention of Chris Guon, the restaurant’s owner, he told the Fair Work Commission that rates of around $12 an hour were normal for casual employees at Korean restaurants in Sydney.

Guon said businesses that do not conform to below-award wages are fearful of payback from rival restaurants, according to the employer watchdog.

He said potential blowback could take the form of false claims to local councils about food hygiene standards.

Guon’s business has entered into an enforceable undertaking with the ombudsman, agreeing to pay employees the entitlements owed, and he has paid a $1700 on-the-spot fine for failing to issue payslips to his employees.

The restaurant will undergo a workplace training program to ensure similar incidents to not occur in the future.

Workplace notices in English and Korean will also be displayed in the business, alongside a copy of an apology, which has been sent to the two former employees.

Employment lawyer and M+K Lawyers partner, Andrew Douglas, told SmartCompany many restaurants are finding it tough due to tight margins, but that is no excuse for not paying people the correct wages.

“There is no doubt that the hospitality industry – because of the inflexibility around awards, penalties and associated rates – makes it very hard for restaurants to remain profitable if they pay rates in accordance with the law,” Douglas says.

“There is significant pressure not to pay at awards rate and it’s quite common in the industry not to do it. But the Fair Work Ombudsman is targeting hospitality, and so it’s fairly self-evident that if you wish to take the risk, you do so with the knowledge you’ll be prosecuted.”

Douglas also points out the employer watchdog does not look kindly on business owners making excuses for not complying with the law.

“Excuses surrounding parody retribution will be treated with the disdain they deserve,” he says.

Fair Work Ombudsman Natalie James said in a statement protecting the rights of temporary overseas and migrant workers was a particular focus for the ombudsman.

“Our message to these groups is that whether you’re a business owner or an employee, workers that have come from overseas have the same rights as local workers and should be treated with dignity and respect,” James said.

“We take a dim view of any employer who seeks to profit by underpaying their staff, particularly vulnerable overseas workers. Underpaying vulnerable visa-holders, who may have little or no English and limited understanding of their workplace rights, is not acceptable.”

One in 10 requests for help sent to the Fair Work Ombudsman come from employees who hold a visa.

SmartCompany contacted 678 Korean BBQ but did not receive a response prior to publication.