Reinvention is the key to success for The Napier Hotel 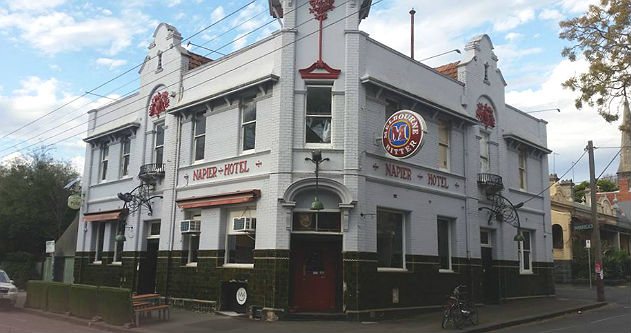 The Napier Hotel – which was the backdrop for the ABC series Jack Irish – is a mainstay of 210 Napier Street, gracing the street for more than 150 years. Customers often tell the owner that it looks like a 19th century English pub, and the stained glass windows are all original.

But with a huge number of traditional pubs in the rapidly gentrifying area, Guy Lawson – who took over in 1996 – says everything has changed, and in many ways it has had to.

“At one point, Fitzroy was probably the roughest and poorest area in Melbourne. There was a lot of unemployment, a lot of crime. It wasn’t the greatest place to be,” Lawson says.

“Between here and Gertrude Street, there were another four hotels that don’t exist anymore. A few of the previous owners went broke but, for whatever reason, we stayed.”

“The Napier Hotel could quite easily have not been here.”

In order to make the Napier an attractive venue for all-comers the pub is filled with eclectic artwork, murals, posters, an AFL tipping board, handwritten menus, plates, old photographs and Fitzroy Football Club memorabilia.

“I came at the start of ’96 and a lot of the Fitzroy players drank here,” Lawson says.

“They had their ‘Save Fitzroy’ meetings at Town Hall, and an old guy threatened to burn all of the posters at the bar. He was that upset about the club merging, so I said, ‘bring it and I’ll stick it up on the wall.’”

“We’ve put stuff on the wall for people to look at and – for the last three years – the Fitzroy memorabilia and Jack Irish are the things that customers have come to check out.”

“Depending on how far you go back, pubs would just be men. A man’s domain where they’d come down to get on the drink.”

“Where the ladies’ toilets are – that was originally the ladies lounge. Women were not allowed to drink in the bar, so they had a separate room.”

When he started running the Napier Hotel he says that food was probably 10 per cent of the business.

In addition to a wide range of local beers, wines and dishes, the menu includes house made gnocchi with Jerusalem artichoke puree, artichoke hearts, crispy sage and beurre noisette sauce.

“In the olden days, you didn’t have to do food,” Lawson acknowledge. “The attitude was, “stick a bit of food in there so I can fit ten more pots in.”

He says that people don’t want that now.

“They want steak. They want a hearty meal. And they want it to be good.”

“From where I started to where I am now, it’s like I’m on another planet. It’s all for the better but if I dug my grandfather up and brought him here, he wouldn’t believe what is going on.”

In order to remain competitive Lawson says that things have to keep changing in the future.

“A lot of people don’t want to change so they get left behind,” Lawson says.

“Your job as a publican is to keep up with the times and give the punters what they want.”

“That’s the only way to survive.”