“I’m running my own race”: Naomi Simson reflects on 20 years of influence and individuality in business

It’s 20 years since Naomi Simson stormed into the Aussie business scene. Having founded experiences marketplace RedBalloon back in 2001, she went on to co-found its now parent company Big Red Group, author two books, serve as a board member, advisor and mentor to other business owners, and — famously — to serve as an investor on Channel 10’s Shark Tank.

In an interview with SmartCompany Plus, Simson reflects on two decades in business. In that time, some things have changed, for sure. But not everything.

Running a business is still all about making your own choices, living by your own rules, and not letting the language you use hold you back.

The more things change, the more they remain the same

Over the past 20 years, “the world has changed dramatically”, Simson tells me over a video chat. But, there are a couple things that have remained the same.

Firstly, back in 2001 about 50% of business names were registered to women, she says. And the same is true today.

Second, she’s still constantly asked the same question: why don’t women-led businesses scale as often, or as quickly, as those led by men? Her answer has remained the same, too.

“In the same way that we’re all unique perfect individuals, so are businesses. It’s ultimately the founder’s choice.”

Every entrepreneur will define success in a different way. Some want to build a global empire, others want to run a micro-business. Both options — and everything in between — are just fine. 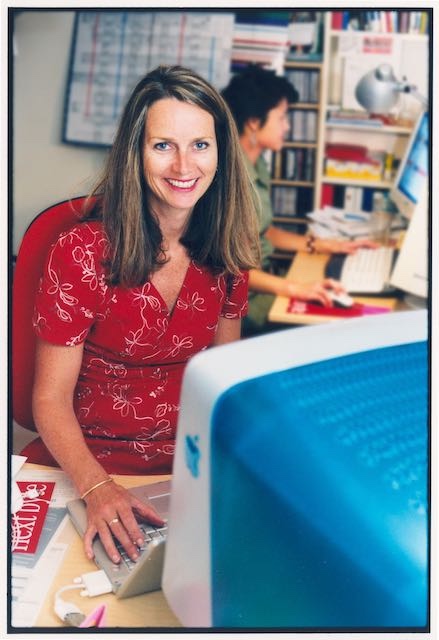 Naomi Simson in the early days of RedBalloon. Source: supplied.

When any entrepreneur hears of other businesses that have exploded overnight success or raised mountains of cash, it’s easy to get caught up in comparisons. They can start to focus on what they don’t have, instead of what they do.

That mindset can hold them back from achieving their own version of success, whatever that may be.

For Simson, the important thing is “giving up those labels”, she says.

“It’s about saying ‘no, I’m running my own race’. That’s what equality is about.”

That said, there is a language women can lean towards using when it comes to business, and in their careers in general, that could hold them back.

Simson recalls an event she participated in recently with a group of 17-year-old schoolgirls. They asked her: have you ever hit the glass ceiling?

“I’m concerned about the language that people are using, which at a very young age is beginning to limit them,” she says.

These young girls were worrying about what could hold them back “before they’ve even got started”.

The flywheel is moving

Through her business, Simson is working to make sure no such barriers exist for women. Big Red Group recently conducted a diversity and inclusion review, which found that 52% of employees are women, and there are more women in leadership roles than men.

The average salary of women in the business was also about 2% higher than that of men, she says.

“We’re really proud of the outcome.”

While Simson believed there was gender equality in the organisation — it was structured that way on purpose — having a measure to work to means “we can hand-on-heart know that’s the truth”.

Equally, the numbers demonstrate that there is no tradeoff between equity being built into a business, and growth over time.

According to Simson, Big Red Group is growing at a rate of about 50% year-on-year, even despite the challenges of the COVID-19 pandemic. She doesn’t see that growth slowing down any time soon.

Back in 2001, buying an experience, either for yourself or as a gift, was fairly unusual. Now, it’s not only commonplace, but something people expect — even take for granted.

Simson believes demand for marketplaces that can facilitate such experiences will only grow. In fact, growth is kind of self-generating.

“If somebody is given a voucher, and they’ve not heard of [RedBalloon], once they’ve seen how easily it works, they become a customer,” she explains.

“It is almost cyclical.

“The flywheel is moving … it’s building and gaining momentum”.

Simson talks about the future of Big Red Group with energy and enthusiasm. It’s clear she’s not likely to hang up her red dresses for good just yet.

In fact, she says she struggles to take two weeks out to relax.

She believes in the work Big Red Group does, and while there’s value to add and she can add it, she’s going to keep going.

That makes a significant difference to those businesses, she says.

But, on a personal level, Simson appreciates that she doesn’t necessarily have to be in an operational or leadership role.

That gives her the flexibility to contribute to the community in other ways, whether that’s writing books, speaking to schoolkids or mentoring other business owners. She also sits on several boards of philanthropic enterprises.

“I think that’s our responsibility as leaders — to contribute.”

We’re wrapping up the conversation, and I ask Simson how it feels to be a role model to other women entrepreneurs. She stops me there, and calls me out on an all-too-common slip-of-the-tongue.

She’s right to do so. Language matters.

She doesn’t see herself as a role model to women, but to everyone in business. Had I been interviewing a man, I wouldn’t have specified.

This is where the media has power, Simson notes. When articles fawn over women-led businesses, making a big deal of the gender of a founder rather than the product or service they’re providing, they only perpetuate the problem.

Around International Women’s Day, this issue can become particularly pervasive. At SmartCompany, striking the right balance is something we grapple with every year.

Simson also recognises her own influence, and the effect she can have on the conversation. That’s another role she can play in the community.

She held what she calls “a little gentle mirror” up to me.

“You didn’t realise it slipped in there,” she points out.

Something tells me I’m not the first — and certainly won’t be the last — to have my reflection kindly, gently and ever so effectively, shown back to me.

Time to spend: 12 entrepreneurs reveal what they plan to invest in during 2022

Three steps to acquiring a business the right way

The Super Age is upon us. Here’s what that means for businesses