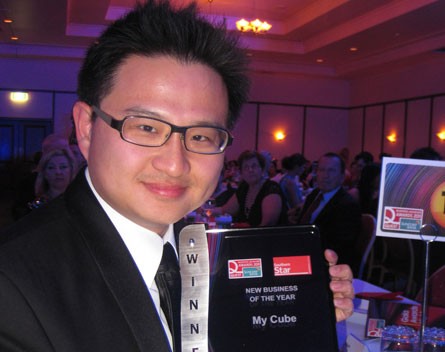 The myCube concept is a store consisting of hundreds of “cubes”, each one displaying a range of innovative products. It won Best Start-up Idea at the 2012 StartupSmart Awards.

“All these cubes are mini shop fronts for entrepreneurs who use them as a platform to start their first retail business at premium retail real estate,” Hsu says.

“We opened our first concept at Sunnybank Plaza in July 2010 with only 11 tenants. Now we have approximately 80 tenants trading within.

“Our concept store has now become a honey pot for shoppers within the little shopping centre, averaging 600 to 1,500 visitors a day.

“We give ordinary people an opportunity to try their hand in entrepreneurship in the current environment, where it is almost impossible to do.”

A former physiotherapist, Hsu says he initially struggled to get into a business mindset.

“Even though I was motivated to do business at the time, my personality belonged to a ‘true’ physiotherapist,” he says.

“Other challenges I have faced would be ones which are commonly known to entrepreneurs in this country: high rent, high human resource costs and high levels of government red tape.”

However, Hsu doesn’t believe in the phrase “biting off more than you can chew”.

“I bite it all off and then I chew like hell,” he says.

“The best part of starting my own business is that I can help people the way I wanted to help.

“With my own business, I have the certainty of knowing that my customers will be permanently benefited from the businesses I have built.”