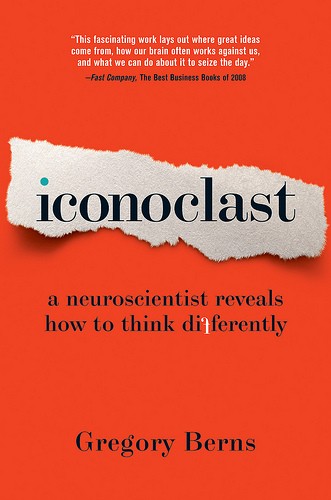 According to author Gregory Berns, an iconoclast is a person who does something that others say can’t be done.

So you want to be an iconoclast? This book won’t tell you exactly how to become one, but it will point you in the right direction.

Berns is a professor of neuroeconomics, which is a sub-discipline at the leading edge of neuroscience.

In turn, neuroscience looks at the chemical crossfire behind our brain’s decision-making. It’s all about dopamine, neurons and the pre-frontal cortex.

It’s a field of study fruitful in providing new insights for behavioural analysis.

Despite all that, it’s a pretty readable book.

That’s largely thanks to analogies that put the ideas in accessible form and narratives that range from Henry Ford to the Dixie Chicks.

Steve Jobs had all three of the above. But note that this book predates Jobs’ passing and before everyone started trying to distil his attributes into the “five key things”. Berns seemed to be onto something already.

Getting those three things to work for you is another matter. This book offers insights but, perhaps mercifully, is no ten step guide to being an iconoclast.

What it does do is put some science behind these characteristics and suggest ways we can manage our potential in those areas.

In terms of perception, the biggest breakthroughs come from the study of visual perception.

To avoid overload, the brain often takes shortcuts. It assumes a result based on past experience, filling in physical gaps in our vision. Unfamiliarity forces the brain to discard its usual categories and create new ones.

A harsh example is iconic glass artist, Dale Chihuly, whose loss of an eye in a car accident prompted a dramatic change in artistic direction.

The point is, commonplace perceptions feel comfortable. The brain requires little energy to process them. It needs a jolt to get a new perspective.

Antidotes don’t have to be accidents. Travel, exploring new social groups or purposely getting outside your comfort zone can bring on new perspectives.

Fear, however, is harder to work with. Usually we don’t want to.

The cornerstone of progress here is acknowledging your fear. Only then can you start to deconstruct it and manage it.

The book makes a useful distinction between ambiguous decisions and risky ones.

Ambiguity, it says, is a fear of the unknown and a prompt for more information. You may not get enough to underwrite a clear decision but you will narrow the probabilities.

Based on unknowns, ambiguous decisions are poor. Risk management, however, is a value judgment based on probabilities.

There’s an equally useful distinction between focusing on the outcome of making money on one hand and getting on with it on the other.

In the words of Henry Ford, “thinking first of money instead of work brings on fear of failure and this fear blocks every avenue of business”.

“It makes a man afraid of competition, of changing his methods, or of doing anything which might change his condition.”

Because the brain will always efficiently default to the most commonplace perception, conformity remains a major roadblock to iconoclasm.

Berns counsels groups and committees to encourage minority opinions if they want to avoid the pitfalls of groupthink.

As for selling your ideas, the book suggests you make your idea more acceptable by appealing to its common-sense logic.

Do this by using analogies and narrative. People are more likely to get onboard with an idea that feels familiar.

Not bad advice for a budding entrepreneur trying to get their idea over the line, iconoclastic or otherwise.