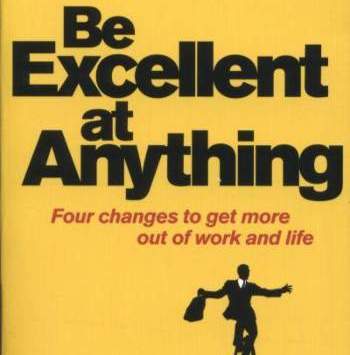 Be Excellent at Anything by Tony Schwartz, with Jean Gomes and Catherine McCarthy

Here’s a nifty little book. You may have heard some of it before, but Schwartz and his collaborators have put the best management thinking – both old and new – into a very practical volume.

This is a manual rather than a book. Yes, there is theory, but it’s engagingly presented and always leads to a practical idea.

At first glance it looks like another one of those titles that gives you The Five Key Rules to Do Everything. There’s a bit of that. For them, it’s the Four Primary Needs. There’s alliteration as well. All those needs start with “S”.

Unfortunately so does snake oil salesman, but that’s not a label that applies to Schwartz. His previous works are about real management issues. He launched the highly regarded Energy Project and has co-authored published works with the likes of Michael Eisner and Jim Loehr, even Donald Trump.

It is aimed at business and at business leaders in particular. But as the title implies, it would be useful for anybody doing just about anything. We are all leaders somewhere along the line.

So what are the four primary needs? There’s echoes of Maslow’s hierarchy of needs in them but each has its own practical spin.

First up is sustainability. It’s about diet and physical health but less about making that an uninspiring burden. The authors are strong supporters of “less is more”. They are not suggesting you turn into a gym junkie.

They make the point that even a marathon can be turned into sections. When it comes to work, a 90 minute sprint will likely yield a more productive outcome than a long slog. So will the next 90 minutes if you take a sensible break in between.

There’s plenty of empirical support for these arguments. My recent experience with some Olympic coaches suggests the same. They all stressed that a training cycle that leads to a peak performance must include the mental, emotional and physical input of dedicated down time.

The biggest influencer: proper sleep. It’s up there with meditation, exercise regimes and diet. They also advocate the afternoon nap. Not a long one; just 20 or 30 minutes. I can go for that.

Next is self-expression. For that, read optimising your uniqueness.

While driving ahead on your strengths will generate strong outcomes, weaknesses can’t be ignored. There are times when you need to attend to them, even if only to acknowledge them and adjust your behavior accordingly.

No virtue, they say, is a virtue by itself. Even the noblest virtues have their limits. It’s a reminder that we all have opposites. Decisiveness and open-mindedness may be opposites, but they are both handy behaviors.

A good manager accepts all aspects of their character, not just the part that might be in management vogue.

The book is broadly critical of the “core competency” approach to leadership, which so often lists only big words that people are meant to aspire to.

That’s what is behind the next “S”, security. It’s not the financial or physical kind; it’s the extent to which you are at ease with who you are. Get comfortable with that and you’ll perform in a far more invigorated zone.

Lastly, there’s significance. That’s the extent to which what you do and what you stand for are in alignment. Managers can do a lot here.

True leaders are there for their people, not for themselves. “The most universally despised of all qualities among leaders is egocentricity.” The most admired have great humility.

That’s the framework on which this book is hung. It’s not so much about doing it perfectly; it’s more about doing it well and loving doing it. Each chapter ends with a mercifully short but very practical list of two or three things you can do right now.

Each idea is simple, but just like the series of sprints that can make up a marathon, they build into a comprehensive strategy of how to be inspired – not just about your business, but about your life.