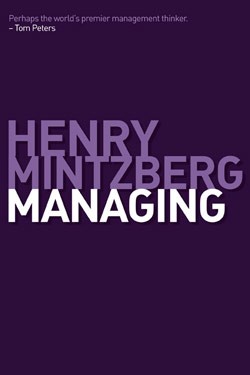 “One damn thing after another.” For many a manager, that tidily sums up what they do.

It’s a quote from one of twenty-nine managers Henry Mintzberg studied in putting this book together. It’s simple title: Managing.

As pithy as that quote might sound, it will ring a realistic bell with a lot of people. Strategy, analysis and leadership models play a big role in business theories.

But in reality, it’s day-to-day action that defines their job. It’s also at the core of the author’s critique of management theory and practice.

This is not coming from someone new to the field. Mintzberg has taught at many of the world’s leading business schools and this is his fifteenth book.

Some of his previous titles give a clear indication of where he is coming from: The Rise and Fall of Strategic Planning (1994), or Managers, not MBAs (2004).

It’s not surprising then that he is skeptical of many business fads. For him, management is neither a science nor a profession; it’s a practice.

There is simply too much going on in a manager’s day. They don’t have time to apply specific fields of science.

Nor can they confine their activities within narrow professional limits. The behavior of too many people in too many areas depends on them.

Their role is nearer to a juggling act. It is made up of unexpected and disconnected demands on their time.

Rather than reaching for prescribed models of leadership, this book is more about acceptance of what he calls “the inevitably flawed manager”. No one is good at everything.

You are a manager because you have certain strengths. Concentrate on applying them rather than trying to be something you are not.

In turn, encourage those who are good at those other things. This is central to collaboration. Managers, says the author, are important to the extent they help other people to be important.

In fact Mintzberg sees the whole leadership industry as counterproductive. It puts a narrow definition on what leading actually is.

It promotes particular styles as the preferred model, even if they are completely contrary to the unique skills you bring to the table.

Too much emphasis on “macro-leading,” he says, has made business over-led and under-managed.

“By excessive promotion of leadership, we demote everyone else” rather than “leveraging the natural propensity of people to cooperate in communities.”

Similarly, the stress on analysis, KPIs and performance has eroded the input of clear management perspectives.

It has “driven out too much judgment in organizations, in the process breeding a good deal of dysfunction.”

There is a lot in this book. The author has highlighted some of the key messages in bold type. If managers are as busy as he says they are, it will help them speed-read the work.

But it is also slightly irritating for those who want to get there own message out of it, rather than his.

Skim readers will also miss some of the cute notions that are not highlighted. One I liked, in which marriage was used as an analogy for matching the right people to the right job, was this: “there is no such thing as a good husband or a good wife, only a good couple.”

Too cute? Maybe, but there is some truth to it and it highlights the importance of ensuring that manager selection is aligned with the requirements of the role.

There are plenty of others.  I’ll finish with one which puts the central role of communication in clear perspective.

“The manager does not leave the telephone, the meeting or the email to get back to work. These contacts are the work.” A touch disappointing perhaps, but also probably true.

It is statements like that which make this a reassuring book rather than an inspiring one. There’s plenty here to help you build a better management style.

It is also nice to know you don’t have to be a clone of a popular management guru or a celebrity business leader to be effective.

Many readers will finish the book feeling comfortable that they aren’t doing such a bad job after all.